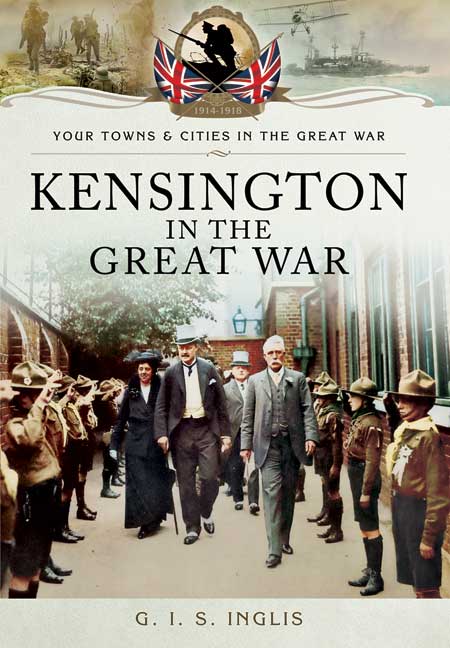 Kensington in The Great War (Paperback)

Add to Basket
Add to Wishlist
You'll be £12.99 closer to your next £10.00 credit when you purchase Kensington in The Great War. What's this?
+£4.50 UK Delivery or free UK delivery if order is over £35
(click here for international delivery rates)

How the experience of war impacted on the town, from the initial enthusiasm for sorting out the German kaiser in time for Christmas 1914, to the gradual realization of the enormity of human sacrifice the families of Kensington were committed to as the war stretched out over the next four years. A record of the growing disillusion of the people, their tragedies and hardships and a determination to see it through.

The Royal Borough of Kensington was an area of huge contrasts: vast riches in the south, but marked poverty in the north. It was close enough to the heart of London that national and London-wide affairs often impinged on local life, while local residents might have national reputations. Thus enormous crowds attended the interment at Brompton Cemetery of one of Britain's finest air heroes, Sub-Lieutenant Warneford, striking London policemen left an indelible impression as they marched their way through the Borough, while Kensington resident Mrs Dorothy Peel attempted to teach the nation how to make food economies in answer to the submarine threat, but there are also quirky magistrates, stroppy butchers, Mr Bushman the ultra-patriotic cartoon character, dangerous dog-walkers who would sweep your feet from under you in the dark nights and some vivid first-hand accounts such as watching the first Zeppelin come down.

The man who turned Kensington into a Borough at war was undoubtedly William Davison (later Sir William) - Kensington's Mayor throughout the war years. He helped complete the local territorial battalion (the 13th Kensingtons), threw his weight behind recruiting a second battalion, and finally raised a Kitchener battalion from scratch, the 22nd Royal Fusiliers, with all their clothing and accoutrements, and even a fully-fitted hutted camp. He was obliged to display enormous organising energy in the in early years and thereafter seemed to be involved in almost everything, from getting food parcels to POWs to serving on Tribunals.

We are fortunate that the Mayor left behind 7 volumes of wartime cuttings, while the local Kensington News was an outstanding source.

The book shows how the war impacted on the area and its people by telling the stories of some of their individual experiences – from quirky magistrates and stroppy butchers to dangerous dog-walkers and ultra-patriotic cartoon characters.

Kensington in the Great War by G.I.S. Inglis
tells the story of a London Borough at war, yet
is above all the story of a unsung hero. Mayor
William Davison ran Kensington council
throughout the war years with immense energy
and dedication - he even raised a Kitchener
battalion from scratch, the 22nd Royal Fusiliers.
In addition, the book explores many other
fascinating stories from the Home Front and
gives a valuable insight into the happenings of
Kensington during the Great War.

About G I S Inglis

He was first moved by the story of the Kensington Fusiliers 30 years ago. With Gary Sheffield he edited the letters of one of its officers, Christopher Stone (From Vimy Ridge to the Rhine, Crowood, 1989), had various articles of social history published, then returned to tell the story of the battalion in The Kensington Battalion (Pen & Sword, 2010)