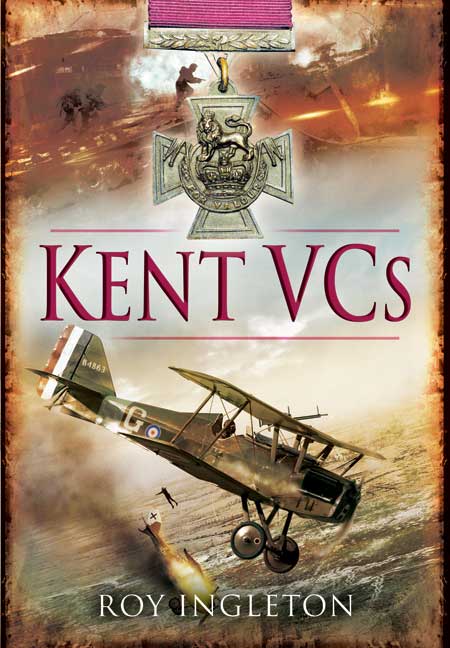 Add to Basket
Add to Wishlist
You'll be £11.89 closer to your next £10.00 credit when you purchase Kent VCs. What's this?
+£4.50 UK Delivery or free UK delivery if order is over £35
(click here for international delivery rates)

As one might expect from a county with the motto 'Invicta' (Unconquered), Kent has produced her fair share of military heroes. Here Roy Ingleton honours 50 of those who have been awarded the nation's highest decoration for valour in the line of duty.

The book is divided into sections according to the conflicts in which the awards were earned, each beginning with a concise historical overview to set the context for these acts of heroism. From the Crimea (some of the earliest VCs ever awarded), through to the Second World War, the entries encompass many of the most famous episodes in British military history and are drawn from all three services. Meet heroes such as Sergeant Major Wooden of the 17th Lancers and surgeon Sir James Mouat who were granted VCs for their part in the Charge of the Light Brigade (Battle of Balaclava, 1857); Captain Walter Norris Congreve who helped to save the guns at Colenso (1899); Lieutenant Philip Neame, scion of Kent's famous brewing family and the only man to win both an Olympic gold medal and a VC (Neuve Chapelle, 1914); Major James McCudden, the leading British fighter ace of WWI and probably Kent's most famous VC winner (France 1917/18); Lieutenant Commander George Bradford RN (Zeebrugge Raid, 1918); Seargent Thomas Durrant, No 1 Commando (St Nazaire, 1942) and Lance Corporal John Harman (Battle of Kohima, 1944).

The nation holds a special place in its heart for winners of the Victoria Cross and this book is sure to inspire not only those who are lucky enough to call Kent home, but anyone interested in British military history.

'This is a well-researched and readable book.'
' ... it is not only military historians who will find it of interest and use but also those who are interested in the history of Kent.'

Well researched and packed with information on the county's heroes. [Kent VCs] may appeal mainly to readers from Kent, but will be appreciated by both historians and general readers as it provides detailed and absorbing accounts of each recipient of the VC.

This book is set out clearly and will fully aid future researches of the holders.

Many of the stories are very touching and will be read with a mixture of sadness and pride. No doubt other acts of courage will result in more Kent VCs being awarded as military campaigns continue.

The Kent Journal of History

Here Roy Ingleton honours 50 of those who have been awarded the nation's highest decoration of valor in the line of duty. The Book is divided into sections according to the conflicts in which the awards were earned, each beginning with a concise historical overview to set the context for these acts of heroism.

A new book brings to life the stories of Kent's little-known war heroes who were awarded the highest honour for bravery from their country the Victoria Cross.

In his book Roy looks back at the exploits of 50 valiant war heroes, from the Crimean War, through the conflicts of the 19th Century and the two world wars.

From the Crimean War to the Second World War, in all branches of the armed forces and from all walks of life, Kent men have demonstrated outstanding courage - and often paid the supreme sacrifice. Here Roy Ingleton honours those who have been awarded the nations highest decoration for valour in the line of duty.

This excellently well-researched book records the braver of other Servicemen with Dover, Deal and Folkstone connections and should find a priority place on bookshelves at the homes of anyone interested in the forces.

For people interested in Kentish military history look no further that Kent VCs (Victoria Crosses) by Roy Ingleton. In his book Ingleton describes no less than 50 courageous acts performed by the men of Kent, the battles in which they were awarded there medals and the conditions under which all fifty were awarded Victoria Crosses. The book outlines the history of the Victoria Cross how it was made and the other medals that were created in the 19th century to award the brave men putting their lives on the line for there country. Ingleton recounts in graphic detail the courageous acts performed by the Kentish men, some of which are beyond belief, in tales of heroism and self-sacrifice that would make any one from Kent or even Britain proud of the men who served in the armed forces over seas. The book not only outlines the history of the medal and the brave men and there actions that earned it but also gives a brief history of the battles in which the medals were earned. The book also has pictures and famous artworks of the various battles that the men fought in as well as the portraits of the men who were awarded the medals. As is usually the case concerning Ingleton, the book is full of Kentish pride and is a necessity for anyone from Kent and/or interested in military history. For over one hundred years the men of Kent had fought in wars and shown outstanding acts of bravery with fifty medals awarded, over six of Britain's hardest ever battles ranging from the Crimean War (1854-56) to World War Two (1939-1945) the book gives a concise and interesting description of what it is to be a hero from Kent.