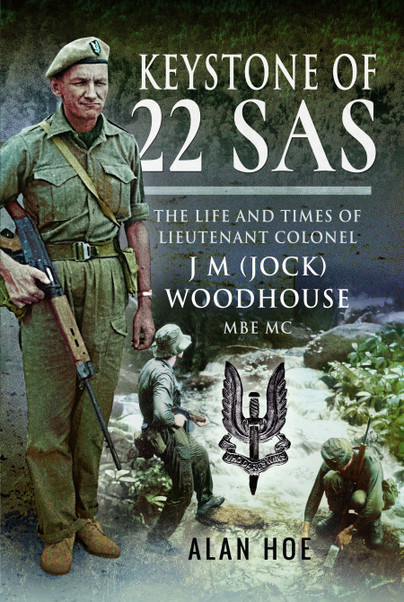 As seen in the Mail Online, June 2019: 'Newly-unearthed photos chronicle the life of soldier who transformed the SAS and established 'The Regiment' as a world-respected elite fighting force.'

You'll be £4.99 closer to your next £10.00 credit when you purchase Keystone of 22 SAS. What's this?
Need a currency converter? Check XE.com for live rates

For all its successes, the future of the Special Air Service was uncertain after the Second World War. Resurrected as 22 SAS Regiment for the Malayan Emergency, after a shaky start it evolved into an important tool in the struggle against terrorism.

Credit for this renaissance in the 1950s must go to a small group of highly motivated officers, of these, Lieutenant Colonel John Woodhouse stood out. As this overdue biography written by an SAS insider describes, Woodhouse’s energy, military knowledge and courage were pivotal to establishing the standards that made 22 SAS into the world’s leading special force unit.

At the expense of his own promising career Woodhouse continued to serve the SAS leading The Regiment (as it became known) through campaigns in Oman, Borneo, Radfan and South Arabia, as it built its unrivalled reputation.

After leaving the Army Woodhouse became a sought after counter-terrorist Consultant taking an advisory and active role in operations worldwide.

While Colonel Sir David Stirling publicly acknowledged Woodhouse as a co-founder, his role has not been widely recognised. As this fascinating book reveals, without his efforts there would probably be no 22 SAS today.


Following a meeting with the charismatic Mike Calvert, Woodhouse – already a decorated World War II soldier – began his association with the Malayan Scouts (later 22 SAS) as an intelligence officer. The unit was afflicted with indiscipline and Woodhouse, who gained a reputation as a martinet sought to eradicate it, then and later with his postings to the SAS, in which he rose to the rank of Lieutenant Colonel of the Regiment.

Alan Hoe expertly describes Woodhouse’s career, especially noting the facts that he was denied promotion to be Colonel of the SAS, as well as a well-deserved Distinguished Service Order, both denials being considered an utter disgrace. But apart from recounting the campaigns, there are moments of levity especially ‘Drag’ Rowbotham’s fitness programme as well as the lusty delights of Hereford’s ‘Dynamite’. Best of all is the description of how Woodhouse was returning to camp and was fired at by a sentry. Woodhouse put the sentry on a charge – for missing him!

The title of a book does not necessarily always match up to the book’s contents; in this case it does, with Hoe succinctly pointing out how Woodhouse became the ‘Keystone of 22 SAS’.

Here is a book that both covers WWII experiences and some of the more interesting post-1945 SAS episodes until the 1970s. And, of course, there are some Nordic connections.

It tells the life of one of the most important figures in post war sas and how he set up the grueling selection process.

It is written in a gripping and honest way and highly recommended to anyone with an interest in the regiment and what it takes to be the best.

The text reads smoothly and there is illustration by a photo-plate section that includes some very interesting images.

Alan Hoe writes an interesting description of the rebirth of the SAS, which survived despite resistance by senior military staff. In 1950 the Malayan Communist Party launched an offensive to install a communist government. The French were having a similar problem with Indo-China and the Dutch in what is now Indonesia. In Korea the United Nations was attempting to stop China seizing Korea. In Malaya, the iconic Colonial Michael 'Mad Mike Calvert', a WW2 war veteran who fought behind Japanese lines during WW2 was given the mission to recruit a highly motivated group of officers and men to track down and kill the communist terrorists. One of the first to volunteer was Major Jock Woodhouse. The new special force became 'The Malayan Scouts ' aka SAS.


Initially Woodhouse had a problem. He found the unit, B Squadron, consisted of 100 undisciplined officers and men. However he was soon joined by recently formed and parachute trained 22 SAS from England. B squadron was disbanded and its men Returned to Unit (RIT). John Woodhouse introduced a training regime to enable small groups of five or six men to operate for long periods in deep jungle to win the hearts and minds of the jungle tribes, kill terrorists, destroying their camps and interrupting their food supply.

John Woodhouse quickly realised that once this special force had achieved its mission, it would be disbanded and with the support of WW2 SAS veterans and others in Whitehall successfully lobbied the Army Council for the unit to a permanent regular cadre - The SPECIAL AIR SERVICE REGIMENT.

A fascinating book that should interest anyone with any thoughts on military history. Well written and containing some good photographs. I enjoyed it very much.

I have just finished reading your book on John Woodhouse. It is first rate and you must have done a great deal of research. It is so well written that I could not put it down. I read it in two days …… Thank you for writing it.

An excellent book which accurately fills a very important and long overdue gap in the history of the post war SAS. This book captures the character of one of the most important architects of 22 SAS.

A book which should be read by military historians, members of the regiment and those aspiring to join.

This is a well written and most enjoyable book of military history which will become essential reading for those interested in the early days of the SAS Regiment.

I think that this is a book that should be read by any prospective officer for selection.

Keystone of 22 SAS arrived yesterday and I have devoured it already! Absolutely riveting …… Fascinating. We all know a bit about the man and of course there were so many stories but you have very cleverly pulled it all together into a great biography. Well done indeed!

I had the fortunate experience of serving with John Woodhouse and found this biography to be an excellent and true account of him both as an SAS officer but also as a true and genuine person. I recommend it not only to other people who were lucky enough to serve with him but also to anybody wanting to get a glimpse of what formed the post-war SAS into the unit it is today.

This is the definitive account of the life of the man who created the modern SAS. The author served in the SAS and knew John Woodhouse personally. The book uses Woodhouse’s own writings and many documents and letters. It is a riveting read and fully explains how the Regiment evolved to its present form. A must read for anyone wishing to understand the Regiment.

This is an account of the life of John Woodhouse, who, in the words of David Stirling “created the modern SAS during the Malayan Campaign by restoring to the Regiment its original philosophy”. The author, better known to us as “Spike”, knew John Woodhouse as his subordinate in the early years and later as a friend. Thoroughly researched, with assistance from Woodhouse and his family, and those in the Regiment who knew him. It uses Woodhouse’s own writings and many documents and letters. The style is fluid and his descriptions of jungle soldiering are excellent.

This book is a 'missing link' in SAS historiography.

As Stirling said, Woodhouse restored the Regiment to its original philosophy: classlessness, self-discipline, humility and the relentless pursuit of excellence. Instilling this ethos was not easy. But he had other qualities: learning from mistakes (his own included) listening to every mans view, making decisions and implementing them with determination. I found how he did all this a fascinating account.

The book is a tribute to a figure who succeeded in shaping a unit in his image and likeness and that deserves for this to be known and appreciated. Jock Woodhouse was a great soldier and a great man.

Alan Hoe enlisted into the Royal Corps of Signals at the age of fifteen years. At the age of eighteen he joined 22 SAS Regiment. He remained with the SAS for over twenty years achieving the rank of major and taking part in five active service campaigns. After his retirement he spent many years in South America in risky security work. During his army service and after he knew John Woodhouse, as a military subordinate and latterly as a friend.

Hoe’s published works include Terrorism: Threat & Response (with Eric Morris, 1987), The Negotiator (written as James March, 1988); David Stirling: The Authorised Biography of the Creator of the SAS (1992); Re-enter with SAS (with Eric Morris, 1994), The Quiet Professional (2011), voted military Book of the Year by the Association of the US Army, and Enyway…A Jump is a Jump (2008).