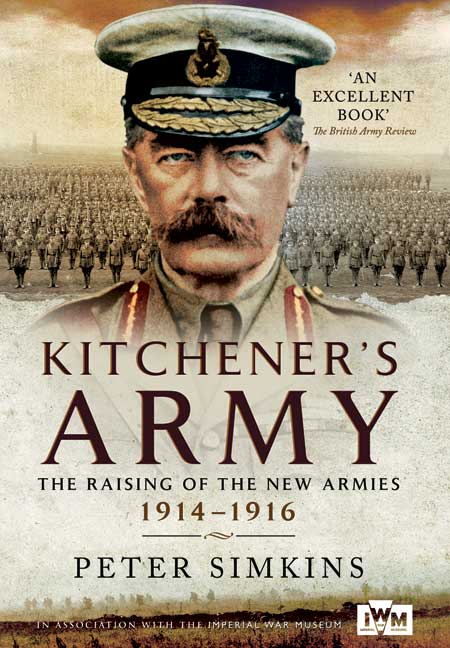 Add to Basket
Add to Wishlist
You'll be £14.99 closer to your next £10.00 credit when you purchase Kitchener's Army. What's this?
+£4.50 UK Delivery or free UK delivery if order is over £35
(click here for international delivery rates)

Numbering over five million men, Britain's army in the First World War was the biggest in the country's history. Remarkably, nearly half those men who served in it were volunteers. 2,466,719 men enlisted between August 1914 and December 1915, many in response to the appeals of the Field-Marshal Lord Kitchener, by then a natural hero.

Peter Simkins describes how Kitchener's New Armies were raised and reviews the main political, economic and social effects of the recruiting campaign. He examines the experiences and impressions of the officers and men who made up the New Armies. As well as analysing their motives for enlisting, he explores how they were fed, housed, equipped and trained before they set off for active service abroad. Drawing upon a wide variety of sources, ranging from government papers to the diaries and letters of individual soldiers, he questions long-held assumptions about the 'rush to the colours' and the nature of patriotism in 1914.

The book will be of interest not only to those studying social, political and economic history, but also to general readers who wish to know more about the story of Britain's citizen soldiers in the Great War.

This book, first published in 1988, is an essential read, and source of reference, for anyone interested in the British Army during the Great War. It is a continual point of reference for anyone looking at the British Army during this time. The author is of course renown, having worked at the Imperial War Museum, President of the Western Front Association, a distinguished expert in the First World War, Member of the Centre for First World War Studies at the University of Birmingham, and the author of pivotal books on this Douglas Haig and his leadership. The book draws on many sources including government papers, diaries and letters from individual soldiers and is a oracle of information and detail on the British Army at during this period.

Kitchener's Army reviews the political, social and economic effects of the wartime recruiting campaign, exploring the motives for enlistment, and examining how the men were fed, housed, equipped and trained before they set off for active service abroad.