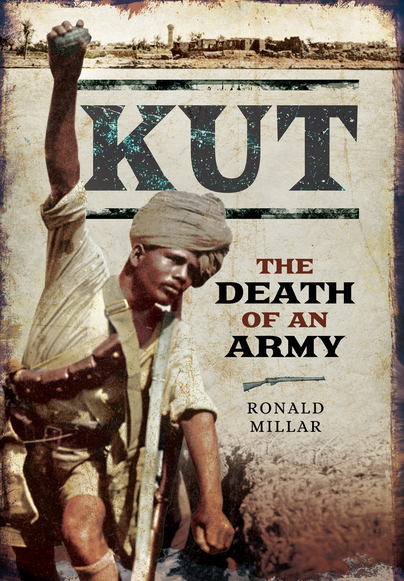 Kut: The Death of an Army (Kindle)

Click here for help on how to download our eBooks
Add to Basket
Add to Wishlist
You'll be £4.99 closer to your next £10.00 credit when you purchase Kut: The Death of an Army. What's this?
Need a currency converter? Check XE.com for live rates

Kut: The Death of an Army is the fascinating, yet largely forgotten, story of the British-Indian Army, which was besieged in Mesopotamia from 1915 to 1916. It is an expert account of the tragic five-month Turkish siege, in which their enemies essentially outlasted them.

The author reveals the day-to-day preoccupations of not only the Anglo-Indian forces, but their enemies – the Turks – as well as local civilians caught in the chaos. Throughout the campaign, the British were beaten back by the Turks, and the ever-prevailent human suffering of the men, so far away from home in this foreign ground, less than helped the cause: starvation, heavy shelling, inadequate medical supplies and disease were all taking their toll. By the end of the campaign, approximately 30,000 British and Indian soldiers had lost their lives.

This informative book will be of interest to anyone wanting a concise and accessible introduction to the conflict and will be essential reading for both students of the First World War, as well as those who have a penchant for military history in general.

...a concise and engaging telling of the siege from the British perspective.

A most welcome second coming of a book describing the debacle of the Mesopotamia campaign.

The narrative of the book contains frequent vivid detail, bringing to life the fighting that took place. One such example is the description of the battlefield:

'Turkish soldiers hung like dummies. Occasionally one flapped his arm, showing he was still alive. One with his jaw shot away made a brittle rattling noise. It would be quiet for an hour or so, then the rattling would begin again. The British troops attempted to bring in a few of the seriously wounded Turks who lay immediately in front of the fort but this activity was stripped by Turkish snipers who had obviously been ordered to stop their comrades being taken prisoner'.
A brutal description of the awful hot conditions the men experienced, and the other battle against nature:-

'The lice lasted until the spring, and then, with the coming of the warmer weather they vanished as suddenly as they had appeared. Hard on their heels came armies of fleas which, though not as number as their predecessors, far exceeded in agility and biting power. After the fleas came the sand-flies with a sting reminiscent of a hot needle thrust into the flesh'.

Overall, this is an important book to all students of the First World War, and particularly to anyone who wished to learn more about this siege which the British Army and her Imperial forces endured. It is complimented by outstanding illustrations and maps.

This is a detailed, well written account of the tragic five-month-long siege by the Turks, with all its terrible hardships and deprivations, until the eventual surrender of the garrison on 29th April 1916.

Ronald William Millar was a proffesional writer, whose other works include The Piltdown Men. This title was first published in Great Britain in 1969 by Martin Secker and Warburg Limited