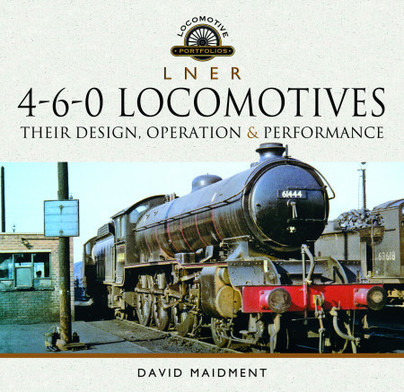 Click here for help on how to download our eBooks
Add to Basket
Add to Wishlist
You'll be £16.99 closer to your next £10.00 credit when you purchase L N E R 4-6-0 Locomotives. What's this?
Need a currency converter? Check XE.com for live rates

"The author chose a huge subject in deciding the scope of this book – some 800 locomotives in all (although more than half comprised a single class, the B1’s) – so it must have been a very demanding task. However, he succeeds very well - the book is about the right length and is full of relevant information, including statistical details of every loco. There are also plenty of logs to interest the performance enthusiast. The author cannot provide as many personal recollections as he does for GWR classes in other volumes of the Locomotive Panorama series, but his memories from around London in the late 1950’s and 1960’s, and the photos of his 00 scale models of several types covered, add the necessary human interest to the book. The photographs – some 400, including a colour section - are well-chosen and have detailed captions and, as always from Pen & Sword, the book is beautifully printed, and the photos reproduce well. Also, the dust-cover has a nice photo of B16/3 61444 at Doncaster. There is slight inconsistency (seen in many Locomotive Panorama books) with Atlantic being spelt with capital A, but pacific with a small p. But that and the unfortunate typo affecting Chapter 2, are the only criticisms that can be made. Otherwise, an excellent book for steam and LNER/Eastern Region enthusiasts."

"I found the book interesting and well written and a comprehensive overview of the classes... for the general reader I highly recommend the book."

David Maidment was a senior manager with British Railways, with widespread experience of railway operating on the Western and London Midland Regions culminating in the role of Head of Safety Policy for the BRB after the Clapham Junction train accident. He retired in 1996, was a Principal Railway Safety Consultant with International Risk Management Services from 1996 to 2001 and founded the Railway Children charity (www.railwaychildren.org.uk) in 1995. He was awarded the OBE for services to the rail industry in 1996 and is now a frequent speaker on both the charity and his railway career and author of four novels, two non-fiction works on street children and over eighteen books for Pen & Sword’s locomotive portfolio series, the royalties from all being donated to the charity.