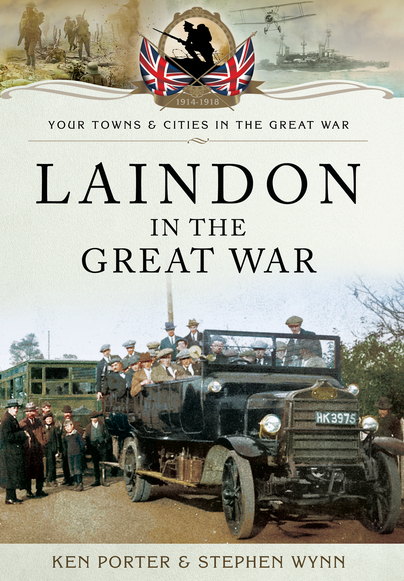 Laindon in the Great War (Kindle)

Click here for help on how to download our eBooks
Add to Basket
Add to Wishlist
You'll be £4.99 closer to your next £10.00 credit when you purchase Laindon in the Great War. What's this?
Need a currency converter? Check XE.com for live rates

Laindon in the Great War is a detailed account of how the war impacted on Laindon and the surrounding district, known today as Basildon, from the outbreak of the Great War in 1914, to the long-awaited peace of 1918.

Throughout the country, initially, there was enthusiasm and excitement for the war, but this soon changed as vivid reports of the war effort began to reach the populous. Fears of invasion and spies around every corner increased, which resulted in a number of locals being reported, in some cases, for very trivial incidents.

While local men fought heroically overseas, two nearby explosives factories provided employment for the town's women folk. The book charts the stories of these women, revealing the dangerous conditions of the factories and the accidents that entailed. As Laindon was a prominent farming area, despite being located only 20 miles away from London, a number of local women, and some from further afield, also joined the Women's Land Army and worked laboriously for long hours on the farms.

Included throughout the book are stories of the heroic men who fought on our behalf. The authors present us with individual's memories, passed down through families, that bring to life what our men went through and what life was like for those on the home front. The book is a powerful eyewitness account that allows Laindon's wartime citizens, who lived through these momentous and catastrophic events, to tell their own stories in their own words.

Ken Porter has finally righted an injustice. The victims have been the lost villages of Basildon...All of these villages suffered devastating losses. Yet remembrance of those who died has not, on the whole, been upheld in the same way as in larger towns. When the Basildon village communities vanished, so did the local memories. Ken, working with co-writer and researcher Stephen Wynn, has dug deep into the stories of the forgotten men from the lost villages.