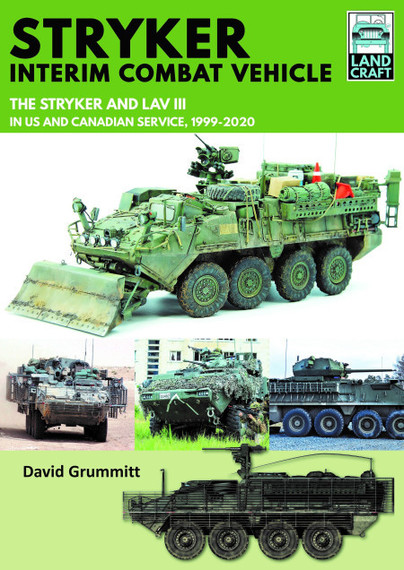 Click here for help on how to download our eBooks
Add to Basket
Add to Wishlist
You'll be £7.98 closer to your next £10.00 credit when you purchase Land Craft 4: Stryker Interim Combat Vehicle. What's this?
Need a currency converter? Check XE.com for live rates

The Stryker interim combat vehicle was a stop-gap measure, designed to meet the needs of the United States to project its military force quickly by air into hotspots around the world. In 2003 it had its baptism of fire in Iraq and has since proved itself an integral part of the US’s warfighting capability and now, two decades into its service, the Stryker has been adapted to face the new threat of a resurgent Russia.

This volume in the LandCraft series of modelling guides examines the Stryker and LAV III in US, Canadian and New Zealand service. In addition to describing in detail the design, development and operational history of the Stryker and LAV III, David Grummitt gives a full account of the wide range of modelling kits and accessories available and features six builds covering the most important variants. Detailed colour profiles provide both reference and inspiration for modellers and military enthusiasts alike.

A welcome addition to the very popular Land Craft Series and this Interim Combat Vehicle demonstrates the political folly of premature spending of ‘peace dividends’ by politicians. Aimed at model makers, this series has become popular with a much wider readership, due to the excellent text describing the subject vehicle and its deployment, including unit structures. – Very Highly Recommended

"Like the rest of the 'Craft' series, it's a nice overview of history mixed with skilled kit building for inspirational modeling info."

The volume is completed by two sections detailing the use of the vehicle in action both in Iraq and Afghanistan.
The Stryker is a versatile platform that has served the US Army well over the years in its various configurations. It was also a new way of dealing with the enemy, an enemy that did not represent an aerial threat (hence the lack of an anti-aircraft version to date). With the emergence, or rather the return of new threats, many Stryker brigades will return to equip themselves with heavier vehicles (M1 and M2) but nevertheless this vehicle will continue to serve for a very long time. The book provides a great foundation for creating your own models, both from an information and photo point of view. As always another great book from the LandCraft series!

"Detailed exterior coverage of many of the LAV family geared to the scale modeller. Numerous clear color photos, illustrations and color plates are provided. Some great tips and a discussion of the merits and drawbacks of the AFV Club, Panda & Trumpeter models."

As a former crewman of the Mowag Piranha IIIH variant of this family of vehicles, I would be happy to hand this volume to a fellow crewmember, or, as a modeller, to a fellow hobbyist to inform and inspire them at the bench.

There are plenty of 1/35 kits already on the market and more small scale ones on the way. So the mix of detail on the real thing and available models will attract lots of modellers I am sure, with the Showcase examples set to inspire many who see them. Well over 4,000 have been built for US Army service, and it seems there will be plenty of years to come for service of the mix of variants.