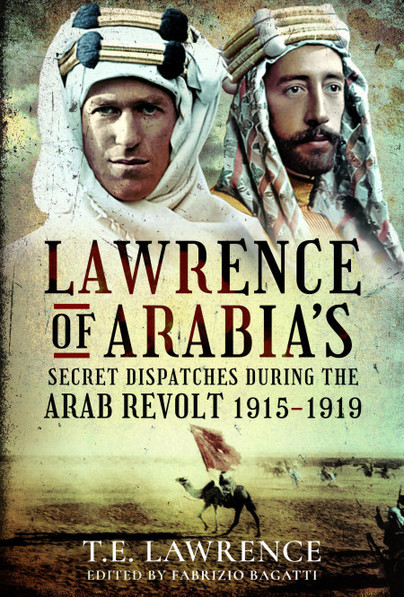 Lawrence of Arabia’s Secret Dispatches during the Arab Revolt, 1915–1919 (Kindle)

Click here for help on how to download our eBooks
Add to Basket
Add to Wishlist
You'll be £4.99 closer to your next £10.00 credit when you purchase Lawrence of Arabia’s Secret Dispatches during the Arab Revolt, 1915–1919. What's this?
Need a currency converter? Check XE.com for live rates

Lawrence of Arabia’s Secret Dispatches during the Arab Revolt, 1915–1919 by Fabrizio Bagatti was just the book I wanted to read these days. I read for my studies about the mandates both from the point of self-determination as a human rights issue and from the view of the Middle East peoples who were organised into countries after WWI which had very little to do with the situation on the ground. So, this book was great for a number of reasons. Firstly it offered me a better insight into the Middle East and the relation Britain had with Feisal and the Arabs. On top of that, reading primary sources with such good and clear commentary is fantastic. I am highly recommending this book to anyone who is studying this period.

But this can be interesting for people who just like history and would want to know more about this troubled time in the 20th century history. Lawrence’s dispatches were published before, but this is the first time they are published in full. Reading his views and what was expected of him to talk about was fascinating. It makes for a good read for anyone with an interest in intelligence too. Some of the things he said were not-PC at all, especially about the Kurds. Other things showed profound insight into how they operate, for example, comparing the Turkish army with the Arab army. Furthermore, he talks about things like prices and how that affected food shortages for both humans and camels.

The dispatches are printed in chronological order and each one has an explanatory note, to put it in context. The book is very well structured and I enjoyed reading it.

"...a fine book for scholars and for anyone interested in the writing and exploits of Lawrence of Arabia."

Bagatti’s compilation is not just a vital companion for any student of the Great War in Palestine, but a mustread for any 21st Century politician and diplomat with aspirations for involvement in the Middle East.

This is an essential read for anybody interested in Lawrence. It shows his role as intermediary and the extent to which he personally engaged with the Arab aspirations. His despatch that described the pre-war situation of the region, detailing the many cultural, tribal, regional, religious and linguistic aspects that both separate and bind the region is a masterpiece. It properly describes a place without the artificial borders constructed by both the Turks and the post war Allied carve up, and much of the information he gives rings very true today. His description of the region around Aleppo and its relationship with Damascus explains much about the recent Syrian civil war. Indeed, it provides the basis to question the consolidation of the region into countries that internally have areas and people who have little in common. It is a great shame that his despatch was not made compulsory reading for those contemplating more recent adventures in the region.