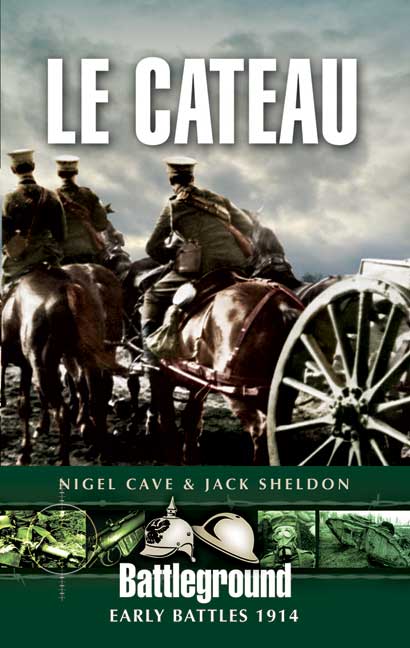 Click here for help on how to download our eBooks
Add to Basket
Add to Wishlist
You'll be £4.99 closer to your next £10.00 credit when you purchase Le Cateau. What's this?
Need a currency converter? Check XE.com for live rates

Le Cateau (26-27 August 1914) was the second major action fought by the BEF in the Great War. His men exhausted after fighting at Mons and by the subsequent speedy retreat, Lieutenant-General Horace Smith-Dorrien (commanding II Corps) decided that he had to make a stand in the vicinity of Le Cateau. There his men took on elements of four German corps in an action that succeeded in giving the BEF a respite, but at considerable cost. Amongst other elements of controversy in the conduct of the battle was the handling of the Royal Artillery. The battle also undermined the already fraught relationship between Smith-Dorrien and the BEF's commander, John French. The battlefield today remains largely as it was, open countryside, and it is an ideal location to view one of the most significant British battlefields of the early days of the war. In this action no less than five Victoria Crosses were won, three of them in one howitzer battery and two by men of the 2nd King's Own Yorkshire Light Infantry.

This comprehensive edition of Battleground series details that events that book place in August, 1914, during this early battle of the First World War.  Following the isolation of II Corps General Sir Horace Smith-Dorrien decided to halt and fight a rear guard action at Le Cateau thirty miles to the south-west of Mons on 26th August, 1914. By this stage, the 4th Division had joined them from England. This battle was more costly for the British than Mons. Although British musketry was to punish the Germans, artillery was to play a more decisive part. The British managed to hold them off and withdraw...

ts content is broken down decisively, between the right of the line, the centre of the line and the left of the line. Following this are 4 tours, 3 of which follow this break down, with an additional chapter focussing usefully on behind the German Lines. With this is included the familiar, extremely helpful content of this series, such as the list of maps and diagrams, and wider guidance for visiting the Le Cateau Battlefield.

The book contains two wonderful introductions from both renowned authors which sets the scene magnificently from both the British and German perspective. Had this battle not been fought, then the continued retreat and consequent situation may have been much worse. As Cave states in the introduction, the battle 'achieved' what Smith Dorien 'hoped that it would do'. He points out that Smith-Dorrien had little choice but to fight at Le Cateau on 'ground not of his choosing and with units widely scattered'... Although, as Cave reaffirms, the Germans could claim a victory and control of the battlefield, their advanced has been dislocated. Movingly, he adds that the decision to stand 'says much about the man (Smith-Dorrien), and the 'soldiers in the BEF in 1914.

Throughout, the book brings to life the ground upon which this battle with fought and presents a thorough analysis of the Battle; perhaps a more challenging task at a time when the battlefield was less static than in later years. As stated in this from the outset: Le Cateau was a short battle and, in the great scheme of things in 1914, not perhaps as significant as British historians tend to make it, it has long remained one of the most controversial of the Great War. Ominously is added that 'it is a sobering thought that the battles of 1918 in the same area cost far more lives than did the battle of 26th August, 1914'.

Le Cateau was the second major action fought by the BEF in the Great War. His men exhausted after fighting at Mons and by the subsequent speedy retreat, Lieutenant-General Horace Smith-Dorrien (commanding II Corps) decided that he had to make a stand in the vicinity of Le Cateau. There his men took on elements of four German corps in an action that succeeded in giving the BEF a respite, but at considerable cost.