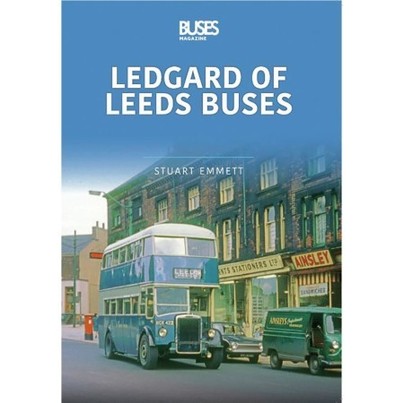 Add to Basket
Add to Wishlist
You'll be £10.49 closer to your next £10.00 credit when you purchase Ledgard of Leeds Buses. What's this?
+£4.50 UK Delivery or free UK delivery if order is over £35
(click here for international delivery rates)

Samuel Ledgard, the legendary founder and owner of the bus operator based in Leeds, started out running a pub in 1896. However, he soon branched out into catering, for which transport was needed and so, in 1912, he bought a lorry along with an interchangeable coach body and started services to the seaside resorts of Scarborough and Blackpool in 1913. Though the First Word War stopped expansion, in 1920 the coastal runs were resumed and Ledgard grew, purchasing many local bus operators. After Samuel’s death in 1952, his son started a new policy of buying mainly second-hand buses – in the next 15 years only 13 new vehicles were bought, but over 170 second-hand ones joined the fleet.

Focusing on the 1950s and 60s, this nostalgic look at the iconic Ledgard takes the reader on a trip down memory lane. Starting with a brief history of the buses themselves and their routes, it then goes on to examine the fleet, covering not only buses from London’s Daimler fleet which ran on all but two of the double-decker routes, but also the single deckers and low-bridge double deckers.

Using a variety of images, with illustrative captions, this book not only rekindles memories for those fortunate enough to have known Ledgards but also gives an insight into these charming vehicles for the many others who were never able to experience Ledgards first hand.

"Members will enjoy the text and photo captions which tell the story in a very readable manner."

"A largely photographic compilation with many images in colour this book also shows now demolished buildings around Leeds. An interesting exercise in nostalgia, showing that Leeds area transport was not only about trams!"

"The book’s many photographs show the buses at work in their operating territory which stretched between Leeds, Bradford, Ilkley and Harrogate, with interesting street and scenic views. For the enthusiast of buses of that period, as well as people with a specific interest in Ledgard’s, this will be a worthwhile addition to the library."