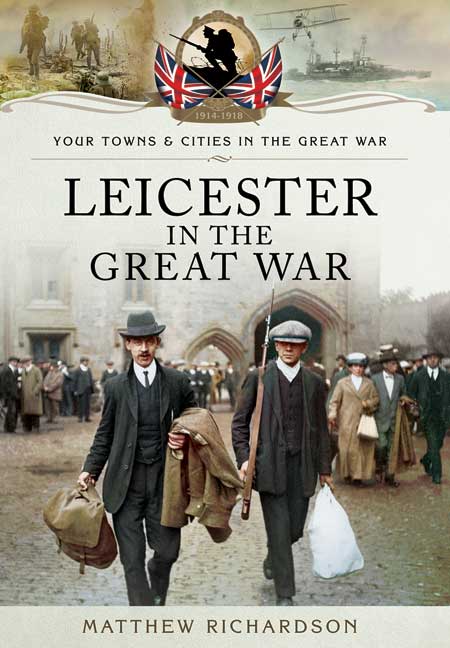 Leicester in the Great War (Kindle)

Click here for help on how to download our eBooks
Add to Basket
Add to Wishlist
You'll be £4.99 closer to your next £10.00 credit when you purchase Leicester in the Great War. What's this?
Need a currency converter? Check XE.com for live rates

Leicester had a strong radical tradition, and was represented in Parliament during the Great War by the outspoken Labour MP Ramsay MacDonald. MacDonald's anti-war views divided opinion in Leicester sharply, but whilst it was slow to provide troops for Kitchener's Army, this was not through lack of patriotism. Instead, Leicester's three main industries – footwear, hosiery and engineering – all had bulging order books as a result of government war contracts.

Bravery on the battlefield, strikes at home, conscientious objectors and the great flu pandemic were all part of Leicester's story in the Great War, and all are covered here. The author allows Leicester citizens, who lived through these momentous events, to tell their stories in their own words, and powerful eyewitness accounts from men, women and children run through this book. Many of these accounts are previously unpublished, and lend a sense of freshness and immediacy to the narrative, making this an ideal purchase for First World War enthusiasts and social historians alike.

This book is packed with interesting stories, photographs and quotes. The writing is for the reader who is interested in Leicester’s history and not so much the historian and academic researcher, although it could still prove useful to anyone who hasn’t already researched Leicester in the Great War. The book reaches out to everyone and almost reads like a novel. It also tells of a war fought both at home and on the battlefields of France and Flanders, using the words of the people who were willing to tell of their experiences; many were not.

As seen in Beacon Magazine.

This engaging investigation will prove fascinating to local and family historians alike - it's well illustrated and well indexed.

Over a period of 30 years, Leicester-born historian Matthew Richardson has researched and collected information about Leicestershire's experience during the First World War. Through his research, Richardson was able to meet some of the last generation who lived through the conflict and many of their testimonies appear in his timely, fascinating new book...Richardson has done a great job; his book is moving, inspiring and humbling in equal measure.

This is a very interesting and highly readable book and one that will b enjoyed by anyone interested in the experiences of ordinary people in the Great War. It will, of course be of particular interest to those familiar with the locations mentioned in the text and pictured in the photographs.