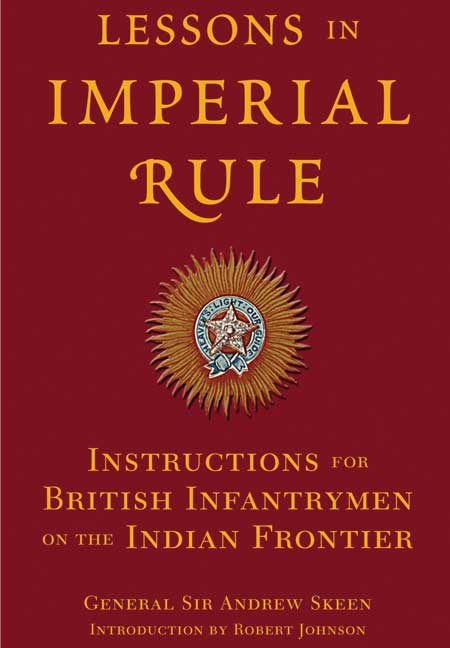 Instructions for British Infantrymen on the Indian Frontier

Add to Basket
Add to Wishlist
You'll be £19.99 closer to your next £10.00 credit when you purchase Lessons in Imperial Rule. What's this?
+£4.50 UK Delivery or free UK delivery if order is over £35
(click here for international delivery rates)

'Don't be misled into believing that the camel is an evil brute without guts, who lies down and dies just to spite you. I know a lot about the camel, and I know him to be a lion-hearted beast who will not lie down to die until he knows he is dying'.

A delightful collection of guidelines for British troops based in India, Lessons in Imperial Rule was first published in the early 1900s. It was addressed to the junior officer serving Infantry battalions who faced more than 80 years of armed peace and fierce war along the North-West frontier. Despite the later introduction of armoured cars, light tanks and aircraft, Skeen's work has lost none of its value and was recently reissued by the Pakistani Army. The lessons explained include the various aspects of work in establishing new camps, securing perimeters, moving platoons, setting up watching posts, methods of foraging and demolition, and emergency occupation of villages.

It is not just the military reader who will find this book interesting but anyone who likes or needs to deal with complex problems.

General Sir Andrew Skeen, KCB, KCIE, CMG (20 January 1873-18 February 1935) served in the British Indian Army, rising to the position of Chief of the General Staff. He was one of Britain's most experienced frontier warfare officers. Robert Johnson is the author of Spying for Empire: The Great Game in Central and Southern Asia.