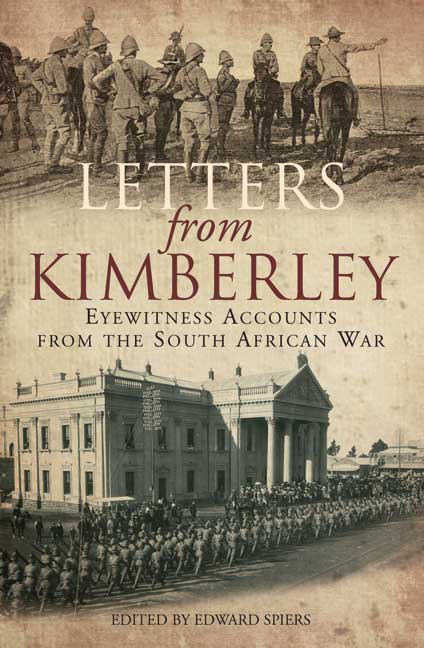 Click here for help on how to download our eBooks
Add to Basket
Add to Wishlist
You'll be £4.99 closer to your next £10.00 credit when you purchase Letters from Kimberley. What's this?
Need a currency converter? Check XE.com for live rates

The defence of Kimberley – and the mission to relieve it – was one of the great dramatic sagas of the South African War. The actual relief, following a spectacular cavalry charge, represented the first decisive upturn in the fortunes of the British war effort, soon followed by a crushing defeat of the Boers at the battle of Paardeberg. Within Kimberley citizens suffered from dwindling food stocks and enemy shelling, but even more controversial were the tensions that erupted between the siege commander, Lieutenant-Colonel Kekewich, and Kimberley's leading citizen, Cecil Rhodes.

In this illuminating new history, Edward Spiers, presents a selection of first-hand accounts of this epic siege. The 260 letters were published originally in British metropolitan and provincial newspapers and they provide crucial insights into the perceptions of civilians caught up in the siege; the desperate and bloody attempts to relieve the town; and the experiences of junior officers and other ranks as they struggled to cope with the demands of modern warfare. Full of human incident, drama and pathos, these fascinating eyewitness testimonies make for compelling reading and add richly to our understanding of the events in Cape Colony.

This is another gem from Edward Spiers, Professor of Strategic Studies at the School of History, University of Leeds.
Extremely valuable is that Spiers places each letter in its proper context with some excellent introductory and explanatory paragraphs.
Speirs has produced a remarkable book and it is highly recommended for the reader who enjoys social and military history.

The 260 compelling letters excerpted in this volume convey a sense of immediacy, realism, and the perceptions, observations, hopes and fears of the soldiers and civilians involved in all aspects of the siege of Kimberley. They superbly supplement the published and official accounts of the Boer War and make a significant contribution to one's understanding of this last major British imperial conflict.

For those interested in the fortunes of Kimberley this book is indispensable, as besides giving the texts of many letters about the siege it gives useful comments about the chief protagonists. There are also some useful facts about the army leaders who were responsible for raising the siege. And there is plenty about the experiences of individual soldiers.The great names of Haig and French appear as the ones responsible for the British cavalry, and individual regiments are given plenty of scope in the narrative. There is not however much evidence of what the civilian population experienced. Perhaps some of their letters could be unearthed to produce another book.