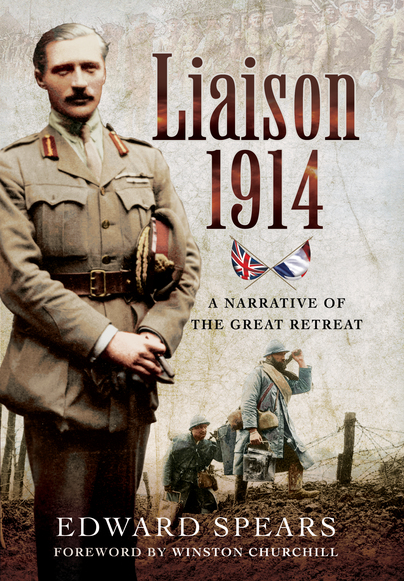 A Narrative of a Great Defeat

Many historians, not least Winston Churchill, agree that The Great War was decided during the first month of fighting. Fortunately a young highly literate and talented British officer was superbly well placed to witness this historic period.

Thanks to his fluent French Edward Louis Spears was sent in mid August 1914 to liaise between Field Marshal Sir John French and the French High Command. In the weeks that followed, events moved at lightning speed and decisions were made without consulting or informing their counterparts. It fell to Spears to update the British of their ally's moves. Without modern communication this often involved Spears travelling on clogged roads between head quarters.

As the sole British representative at, first, HQ Fifth French Army and then Tenth Army, the influence of this 28 year old author was immense and Spears on many occasions proved unworried about speaking his mind.

Clearly his efforts were appreciated; he was made a Chevalier de la Legion d'honeur and awarded the Military Cross (he was wounded four times).

Churchill , who became a life long friend, wrote the Foreword to the original edition of this truly extraordinary account which anyone who wishes to understand the events of 1914 must read.


Well I can't say what number it would be but I will say it's a definite for my all time top ten books of any genre! As for just WWI books, it easily deserves a place in my top five! Anyone with the slightest bit of interest in WWI must at some point read Liaison 1914. I'd even recommend it as a great read to those who haven't shown any interest in the War, though I reckon by the end of it this would be the first book of many they'll end up reading about the War:) Go out and treat yourself to a copy.

Edward Louis Spears was born in Paris on 7 April 1886. His supreme ability to speak fluent, accent- less French owes much to his upbringing.

He joined the British Army in 1903 and was commissioned into 8th Royal Irish Hussars. His career was anything but conventional. His liaison assignment, described in this book, made him the first British Officer at the Front.

He continued in a liaison role throughout the War and his range of high level French contacts proved invaluable if not universally popular.

His subsequent career involved business interests at home and overseas. He was twice a Member of Parliament. Like his friend Winston Churchill he was strongly anti-appeasement.

In 1940, Churchill appointed him his Personal Representative to the French Prime Minister and later to de Gaulles Free French.