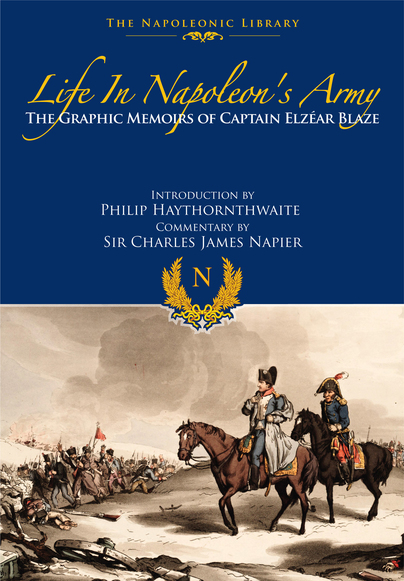 Add to Basket
You'll be £19.99 closer to your next £10.00 credit when you purchase Life in Napoleon's Army. What's this?
+£4 UK Delivery or free UK delivery if order is over £30
(click here for international delivery rates)

The Napoleonic Library is an outstanding collection of seminal works on the Napoleonic Wars. It features evocative contemporary memoirs and makes available once again the classic works on the subject by military historians.

This is a fine addition to the outstanding collection of classic works published, under the frontline imprint, on the Napoleonic Wars. This fascinating book reproduces the memoirs of a
mid rank officer during the Napoleonic Wars. There is no photo-plate section but there are some charming pen sketches. A very worthwhile read of original source material.

Following an Introduction by Philip Haythornthwaite and Commentary by Sir Charles James Napier, this useful account, written by an officer of wide experience and colourful style, presents a picture of the First Empire. Captain Blaze entered the army as a youth via the Imperial Guard elite organisation, a path open only to those of some wealth. After gaining his commission as an officer, he served in campaigns from Poland in 1807 to the fall of France in 1814. The author provides an officer’s perspective on the character, customs and mode of operation of the French army. Its value is strengthened by anecdotes from the author’s own experiences. First published in 1995 by Greenhill Books and now again in 2015 by Frontline Books, an imprint of Pen & Sword Books Ltd, this is a splendid addition to the Napoleonic bookshelf, written by someone ‘who was there’.

Although I usually discuss books about the WW2 era, here's one about the Napoleonic era that I thoroughly enjoyed reading. The main attraction to me is the fact that it's been written by an officer of Napoleon's army, i.e. an actual eye witness of that period. Not only that, the captain is also a gifted observer and writer.

Another attraction of the book are the comments made by its editor of the first English edition, Sir Charles James Napier, who was a soldier in that same period and saw the wars from the opposite side. Napier wanted to compare the French ways to the British ways, to help young officers in their study. But today both provide interesting reading, understanding how things were done back at the time.

It is of course really interesting to learn what people looked like, how they behaved, what were the customs and issues in that army a long time ago. And not really surprising, not that much has changed compared to today´s armies and living as a soldier. All of us who have served will recognize many of the things that Blaze describes.

What most of us have NOT experienced however, is being on a major campaign with a large army, through a densely populated area and having to rely on local food provisions. That was one of the parts that struck me most. An army of hundreds of thousands of soldiers (or even tens of thousands) without hardly any logistical support, marching on foot, will need an enormous amount of rations. Reading how the army dealt with this - or rather from - the local population, is most interesting indeed.

I truly recommend it!

Part memoir, part travel book, and part military history, this is the story of an officer in the army of Napoleon, whom he served from 1807 to 1815. From the privations of being in the field, the hazards of the bivouac, the equipment, the food, the battles, the shortcomings of the Spanish - this is an all-encompassing contemporary account of the Napoleonic period.

Philip Haythornthwaite is one of the most distinguished and prolific writers on the military history of the Napoleonic era. He has long been established as an authority on the major battles of the time, in particular those fought in the Iberian peninsula, and he has made a special study of the armies and the soldiers who confronted each other across Europe during 15 years of almost continuous warfare. His many previous books include: The Peninsular War: The Complete Companion to the Iberian Campaigns 1807-14; The Armies of Wellington; Waterloo Men: The Experience of Battle, 16-18 June 1815; Die Hard! Famous Napoleonic Battles; The Napoleonic Source Book; Who Was Who in the Napoleonic Wars; Wellington's Army: The Uniforms of the British Soldier 1812-1815 and Waterloo Armies.