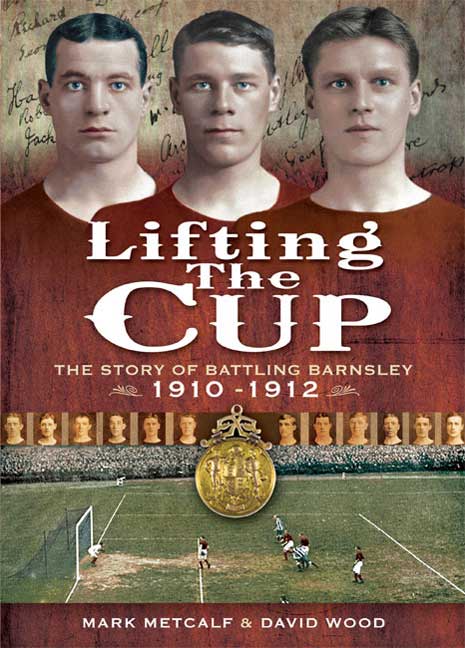 Click here for help on how to download our eBooks
Add to Basket
Add to Wishlist
You'll be £4.99 closer to your next £10.00 credit when you purchase Lifting the Cup. What's this?
Need a currency converter? Check XE.com for live rates

This is the first detailed account of Barnsley Football Club's most illustrious and successful period. Between 1910 and 1912 'Battling Barnsley' won their way through to the FA Cup Final, then the most prestigious football tournament in the world, on not one but two occasions and capped things off by beating West Bromwich Albion in the 1912 final replay at Bramall Lane, Sheffield, when Arthur Fairclough 'lifted the Cup' for the only time, so far, in the Club's long history.

This centenary celebration brings the 1910-12 era back to life through match reports, and a wealth of photographs (some never seen before) and memorabilia. It also pays tribute to the extraordinary support of thousands of Barnsley fans. Against a background of major social and political change, this book also examines the careers of legendary players such as Dickie Downs, Bob Glendenning, Wilf Bartrop, Tommy Boyle, George Utley, George Lillycrop - and of course the goal-scoring hero of 1912: the great Harry Tufnell.

A fascinating 169-page story of how Barnsley reached the FA cup finals, lifting the trophy for the only time in their history in 1912.

The Current Barnsley Director Barry Taylor contributed the forward to a book enhanced by decent photographs and illustrations.

This book brings to life the unforgettable story of 'Battling Barnsley, where Barnsley Football FC played a magnificent three seasons and thrilled supporters by winning their way through the final of the most prestigious cup tournament at the time - the FA Cup. One hundred years later the club's victory has not been forgotten and Lifting the Cup not only relives the glory days through match reports, photographs (some previously never seen before) and memorabilia from he momentous time, but also examines the players, who against a background of major and social political change, became legends in their own right. A must read for passionate football enthusiasts.

During 1910 to 1912 Barnsley Football Club were in their most successful period, becoming known as 'Battling Barnsley', they made their way into the FA cup final twice and won once in 1912 against West Bromwich Albion at Bramall Lane, Sheffield, the only time in this particular tournament they have, so far. Their successful period is brought together in this book by two football fans, Mark Metcalf and David Wood, Metcalf who has written many other books on different football teams and also a biography of a legendary Sunderland player and Wood who was born in Barnsley, has seen the team play on 122 different grounds and is now the official historian to the club. These two writers have gathered together match reports, never before seen photographs and memorabilia. It also gives us an insight of the careers of legendary Barnsley players, such as the goal scoring hero of 1912, Harry Tufnell, as well as paying tribute to the amazing support of the thousands of Barnsley fans, who are still as supportive today.

A new book chronicles the amazing story of the Oakwell club's sole successes nearly a century ago.

David Wood was born in Barnsley in 1963 and was first taken to Oakwell by his father in 1970. He has seen 'The Reds' play matches on 124 different grounds and now serves as Official Historian to the Club.

Married to Sarah, with a daughter, Rachel, David lives in Bedfordshire.