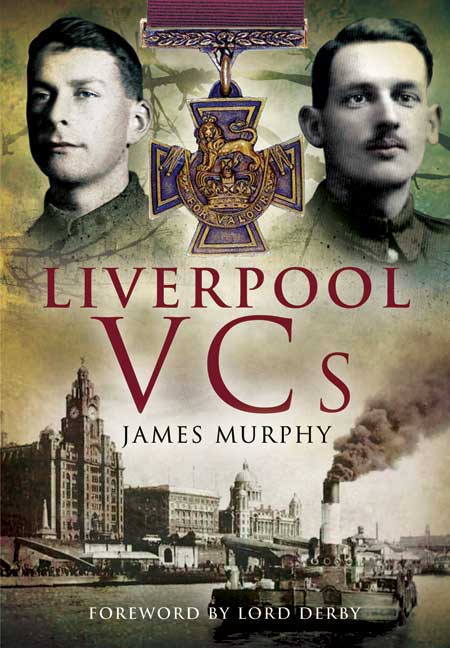 Click here for help on how to download our eBooks
Add to Basket
Add to Wishlist
You'll be £4.99 closer to your next £10.00 credit when you purchase Liverpool VCs. What's this?
Need a currency converter? Check XE.com for live rates

Being a Liverpool born ex soldier of 22 years I found this book very interesting. I would however like to provide some information of another VC Hero from Liverpool that he may have missed. I came across this by accident when looking at the locations of graves for Liverpool VC's and noticed a memorial at Kirkdale Cemetery where I third name was mentioned. His name was Charles Anderson late of The Queens Bays which was part of my Regiment 1st The Queens Dragoon Guards. I have acquired the following information from our Regimental HistorianCharles Anderson. Born Liverpool, Lancashire circa 1827. Some historians believe he was born in 1826. Enlisted in the 2nd Dragoon Guards at Dublin on 11 December 1845; Promoted to Corporal in 1858 (a field promotion for gallantry)
Twice demoted from Corporal; Served in the Indian Mutiny 1857-8 where he won his VC at Sundeela Oudh, India on 8 October 1858
Discharged as Corporal at Colchester at own request on 28 June 1870
For saving the life of Lieutenant-Colonel Seymour, C.B., commanding the regiment, in an attack made on him on the 8th October, 1858, by mutinous sepoys, in a dense jungle of sugar canes, from which an
attempt was made to dislodge them. The mutineers were between 30 and 40 in number. They suddenly opened fire on Lieutenant-Colonel Seymour and his party at a few yards distance, and immediately afterwards rushed in upon them with drawn (native) swords. Pistolling a man, cutting at him, and emptying with deadly effect at arm's length every barrel of his revolver, Lieutenant-Colonel Seymour was cut down by two sword cuts, when the two men above recommended, rushed to his rescue, and the
Trumpeter (Monaghan) shooting a man with his pistol in the act of cutting at him, and both Trumpeter and Dragoon driving at the enemy with their swords, enabled him to arise, and assist in defending himself again, when
the whole of the enemy were dispatched. The occurrence took place soon after the action near Sundeela, Oudh, on the date above mentioned."
Decorated with the VC by the C-in-C India, Gen. Sir Hugh Rose GCB, at Benares, India on 5 January 1863.
The details of his death. A Charles Anderson, coal miner. died from a fractured skull after falling off the cliffs at Seaham Harbour, Sunderland, on 19th April, 1899. The Sunderland Echo recorded:
"This morning the dead body of an old man which has since been identified as that of Charles Anderson, 70 years of age, a miner, was found at the bottom of a large cliff in a garden situated in the lower reaches of Dawdon Dene, belonging to Mr. H.B. Wright, solicitor, of Seaham Harbour. It is presumed he fell from the cliff. The deceased lodged with Mr. William Stokoe, who lives at Swinebank Cottages.