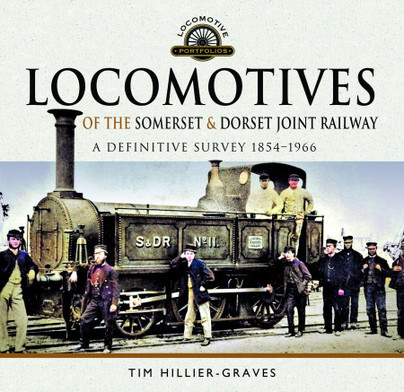 Click here for help on how to download our eBooks
Add to Basket
Add to Wishlist
You'll be £16.99 closer to your next £10.00 credit when you purchase Locomotives of the Somerset & Dorset Joint Railway. What's this?
Need a currency converter? Check XE.com for live rates


"Each era is covered in great detail, with not just photos but also technical drawings for many of the classes described. The amount of detail in the text is impressive, but it is well written and never becomes tedious. Overall, this is a book for anybody interested in the history and geography of the S&D and the locos that worked over it. It is a most worthy part of the "S&D" library" covering one of the lesser-known aspects of the railway and can be highly recommended."

"The well laid-out book starts with a brief overview on the railway's history and then covers the early broad gauge period, followed by the two Midland eras, then the LMS and British Railways years in six separate chapters. The book also covers some of the accidents that occurred on the line through the years and the back histories of the companies, railways and personalities, which were involved in the locomotive matters on the S&D. There is a comprehensive index at the end of the book, so you can pick individual information you need easily."

‘Slow and Dirty’ or ‘Serene and Delightful’, the old Somerset & Dorset never seems to fail to provoke a reaction – positive or otherwise. The author of this comprehensive work, another in the excellent Locomotive Portfolios series from Pen & and Sword, may have a point when he comments that the company “was a branch line that had ambitions to be much more but lacked the clout to do so”.
The book opens with a chapter of context in “a line created and remembered”. As with the succeeding chapters this is lavishly illustrated with photographs, portraits, plans, maps and diagrams and again, as throughout the the the author is at pains to make links with other companies and the personalities who framed the locomotive policy of the S&D as the line developed. Your reviewer was particularly impressed by this aspect of the text, the relating of the specific S&D concerns to the wider railway scene wherever appropriate.
The chapter on ‘Locomotives in the early years 1854 to 1875’ reminds the reader that the S&D started life as the broad gauge Somerset Central at the western end and the standard gauge Dorset Central to the east. This brought the formidable Bristol & Exeter and later Great Western, locomotives to one end of the line and the designs of Gooch and Beattie for the London & South Western to the other. Following the amalgamation of the two components of the line locomotives were purchased from private builders – such as George England of Festiniog fame.
Two extensive chapters are devoted to the ‘Midland years’. These give a decent outline as to what was going on at Derby as well as what was provided for the Somerset & Dorset and there is a detailed examination of the gestation of the iconic 2-8-0 locomotives. 4-4-0s and 0-6-0s based on Derby practice as well as locomotives from private builders also feature here.
‘The LMS Years’ continues this excellent contextual survey with more modern types of locomotives such as ‘Black 5s’, 8Fs and even Sentinels now making an appearance, joined by elderly LSWR types at the eastern end of the line. The contribution of the line to the war effort is considered in this chapter as is the effect of the war on the railway.
The concluding chapter is ‘A Long Goodbye’, the sad run-down of the line – with inter-Regional politics in there somewhere, perhaps? – contrasting with the diversity of motive power used on the services to the very end, everyone but the former LNER being represented at the head of S&D trains! The arrival of the puissant 9Fs in the very twilight years of the line features prominently at this point.
The book has a comprehensive index and a useful list of reference sources. This is a splendidly produced volume with a tremendous amount of information presented in a most attractive, informative and engaging manner.
It deserves to become the ‘standard work’ on the steam locomotives of the Somerset & Dorset and comes most highly recommended.

"It is many years since a previous work was published which concentrates on S&D loco history, and the present volume provides a valuable addition to the story and is highly recommended."

The well laid out book starts with a brief overview on the railway's history and then covers the early broad gauge period, followed by the two Midland eras, then the LMS and British Railways years in six separate chapters.

With the only other specific loco history of S&D out of print this book will fill that slot.

The Journal of the Bulleid Society - Bulleid Express, Winter 2021-22

"For anyone interested in the Somerset & Dorset Joint Railway, its history, and locomotives, this is an excellent book. Highly recommended."

"It is illustrated throughout with some notable photographs from the early period in particular. Well printed on good quality stock with sensible typography, members coming to the subject will find much useful information."

"Overall, the book should be of interest to anyone who wants to study the history and geography of the S&D, the locomotives that worked over it, the engine crews and engineering support teams. For anyone wanting to use it as a reference source there is an excellent index, but the writing is in a style that encourages continuous reading. Highly recommended."

"It is a work well worth consideration."

Featured in a book review with Philip George

This is probably the definitive book on the locomotive history of this railway company. The book covers in detail the complete motive power history of the line.