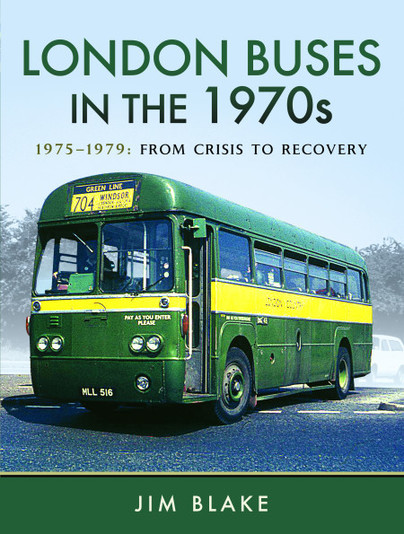 Click here for help on how to download our eBooks
Add to Basket
Add to Wishlist
You'll be £8.99 closer to your next £10.00 credit when you purchase London Buses in the 1970s. What's this?
Need a currency converter? Check XE.com for live rates

Continuing with photographs from Jim Blake's extensive archives, this book examines the second half of the 1970s, when both London Transport and London Country were still struggling to keep services going. This resulted both from being plagued by a shortage of spare parts for their vehicles, and having a number of vehicle types which were unreliable the MB, SM and DMS classes.

In 1975, both operators had to hire buses from other companies, so desperate were they. Many came from the seaside towns of Southend, Bournemouth and Eastbourne. This continued until the spares shortage began to abate later in the decade, particularly with London Country.

As the decade progressed, the two fleets began to lose their 'ancestral' vehicle types. London Country rapidly became 'just another National Bus Company fleet', buying Leyland Atlanteans and Nationals common to most others throughout the country. Having virtually abandoned the awful MB and SM-types, London Transport had to suffer buying the equally awful DMSs well into 1978, but had already ordered replacements for them by that point the M class Metrobuses and T class Titans both of which would finally prove successful. However, plans to convert trunk routes serving Central London to one-person operation were largely abandoned.

A very interesting book. The passenger transport crisis in London in the mid-1970s was a major event.

This is a compilation of photos taken in the difficult period in the late 1970s when LT and London Country were plagued with maintenance problems. A valuable record of the London scene at the time.