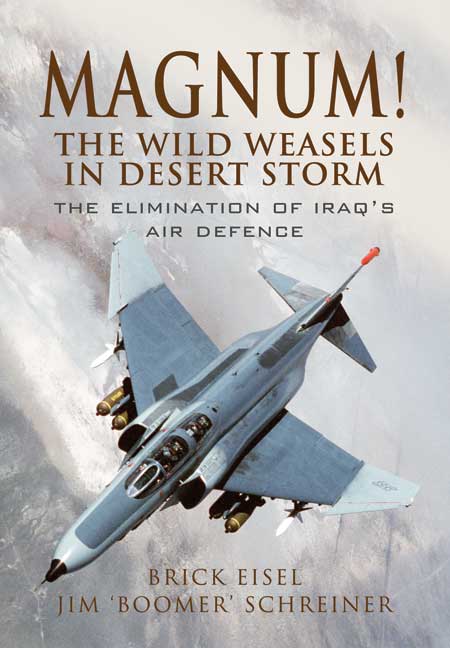 Click here for help on how to download our eBooks
Add to Basket
Add to Wishlist
You'll be £4.99 closer to your next £10.00 credit when you purchase Magnum! The Wild Weasels in Desert Storm. What's this?
Need a currency converter? Check XE.com for live rates

This book is based upon a journal Jim Schreiner kept during his deployment to the Persian Gulf region for Operations DESERT SHIELD and DESERT STORM. Building upon that record and the recollections of other F-4G Wild Weasel aircrew, the authors show a slice of what life and war was like during that time.

The pawns in the game, the ones that had to actually do the fighting and dieing were the hundreds of thousands of men and women who left their homes and families to live for seemingly endless months in the vast, trackless desert while the world stage-play unfolded. To them, the war was deeply personal. At times, the war was scary; at other times, it was funny as hell. Usually, if you survive the former, it turns into the latter.

The book is based on a journal Schreiner kept during his deployment to the Persian Gulf region for that operation, combined with records he collected. Eisel and Schreiner conclude that by modifying an outdated airplane, the Air Force succeeded in defeating the Soviet air defence system and taking some revenge for its losses in Vietnam.

If you’re a military aviation geek like me, you can’t get enough of books like this. It chronicles the exploits of the authors as they deployed, fought, and returned home from Desert Shield / Desert Storm.

Chapter 1 covers the history of the Wild Weasel program, including the origin of the now infamous “YGBSM” unofficial motto. They also get into the specific threats faced and the basics of how they can bring down enemy aircraft.
Chapters 2, 3, and 4, detail the career paths of the authors and their training to become Wild Weasels.
In chapters 5-16 every imaginable detail of the their exploits during Desert Shield / Desert Storm are chronicled.
Occasionally, it does tend to get very technical but there’s an excellent appendix that spells out the more complex Iraqi systems. The color plates are excellently done and the B & W are very well placed in the context of the mission descriptions.

Three appendices lay out the specifics of the Wild Weasel platforms ( F-100C through F-16CG), Iraqi Air Defense Order of Battle, and CENTAF Wild Weasel HARM Shot Log. The shot log is a great reference for modelers because is includes things like tail numbers, dates, and results.

A glossary of acronyms would have been helpful but overall, this is a great read.