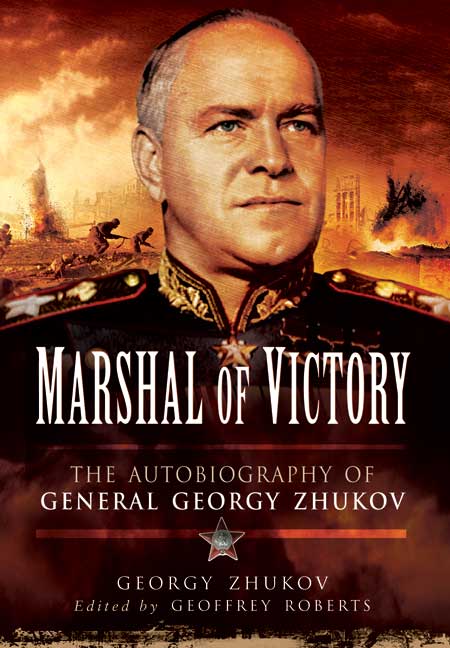 Click here for help on how to download our eBooks
Add to Basket
Add to Wishlist
You'll be £4.99 closer to your next £10.00 credit when you purchase Marshal of Victory. What's this?
Need a currency converter? Check XE.com for live rates

At Moscow, Leningrad, Stalingrad, Kursk and Berlin and in virtually all the principal battles on the Eastern Front during the Second World War, Georgy Zhukov played a major role. He was Stalin's pre-eminent general throughout the conflict, and in his autobiography he chronicled his brilliant career as he saw it – and wanted it to be seen.

His memoirs are fascinating reading because they portray in first-hand detail, through the entire course of the war, the
thinking and decision-making at the highest level of the Soviet command. They are one of the indispensable sources for studying the struggle in the east, and they give the reader an intriguing insight into Zhukov the man as well as Zhukov the commander.

This new edition of the memoirs, which were first published in heavily censored form in Russian in 1969, features a new
introduction by Professor Geoffrey Roberts who summarizes important additional material that was omitted from previous editions. He also provides, in an appendix, a translation of Zhukov's account of the 1953-7 period as well as an interview with Zhukov that has previously not been available in English.

Zhukov's autobiography is an essential text for readers who are keen to deepen their understanding of how Stalin and his generals conducted the war on the Eastern Front.

This autobiography is a remarkably frank account of a remarkable career. Zhukov is never less than forthright about the difficult political and military realities faced by Russia during the 'Great Patriotic War'...This new version is the first full edition in English. It is edited by Prof Geoffrey Roberts of University College Cork, an internationally renowned expert on the Soviet Union during the second World War and the cold war. Alongside his well-researched introduction, Roberts has included translations of Zhukov's account of the 1953-7 period and previously unpublished interview material. This book is an important source on the conduct of the war on the Eastern Front. And, as an account of the career of one of the most influential generals and political survivors of the 20th century, 'Marshal of Victory' is fascinating. Given the renewed tensions between the Kremlin and the West, it is also a timely insight into the Russian military mindset.