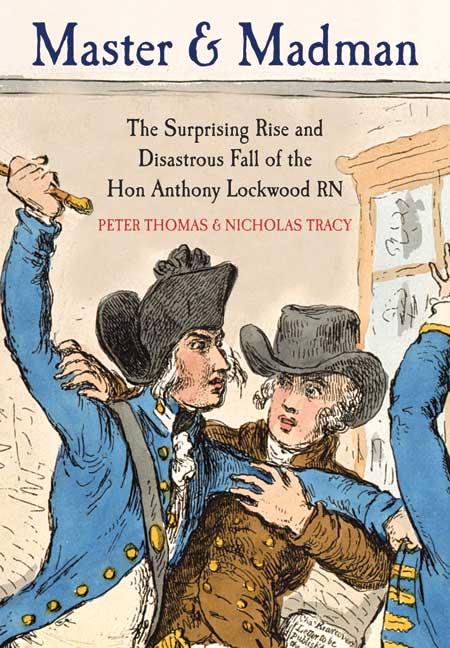 Click here for help on how to download our eBooks
Add to Basket
Add to Wishlist
You'll be £10.00 closer to your next £10.00 credit when you purchase Master and Madman. What's this?
Need a currency converter? Check XE.com for live rates

Anthony Lockwood's story is at the heart of the Georgian Navy though the man himself has never taken centre stage in its history. His naval career – described by himself as 'twenty five years' incessant peregrination' – followed a somewhat erratic course but almost exactly spanned the period of the French wars and the War of 1812. Lockwood was commended for bravery in action against the French; was present at the Spithead Mutiny; shipwrecked and imprisoned in France; appointed master attendant of the naval yard at Bridgetown, Barbados, during the year the slave trade was abolished; and served as an hydrographer before beginning his three-year marine survey of Nova Scotia and the Bay of Fundy. Against the odds he managed to finesse a treasury appointment as Surveyor General of New Brunswick and became the right hand man of the Governor, General Smyth.

Deeply ingrained in his character, however, was a democratic determination that was out of step with the authoritarian character of the Navy and the aristocratic one of New Brunswick. His expectation of social justice verged on madness, and when he finally succumbed to lunacy it was in the defence of democracy. The turbulence of the times inspired Lockwood to stage a one-man coup d'etat which ended with him being jailed and shipped back to London to live out his days as a pensioner and mental patient. Truly a dramatic rise and a tragic fall.

It is an engrossing tale of a public servant's descent and one well told with sympathy and accuracy by Thomas and Tracy...With few studies on servants of the crown and indeed specifically on Lockwood, it fills a gap in the literature.

What we have here is a detailed and interestingly written account of a Georgian life made all the more so by the nature of the rise and eventual fall into obscurity of the Right Honourable Anthony Lockwood RN.

This is a book that is difficult to put down until the final page. If is difficult at times to remember that this is a true story and not the imagination of an accomplished writer of fiction.

Canadians prefer to maintain a prosaic view of their politics. We tend to ignore the fact our longest-serving prime minister communed with his dead mother, or that there was once a premier of British Columbia named Amor De Cosmos. But we simply don’t know about Anthony Lockwood. On June 1, 1823, Lockwood, a member of New Brunswick’s ruling Executive Council, dictated a proclamation in Fredericton’s public square declaring he was overthrowing the government. He then galloped through the village of 1,700, waving his pistols and threatening to kill his enemies. His one-man coup d’état failed when the high sheriff arrested him. Lockwood was declared mad, and later left for England to spend the rest of his life in and out of asylums.