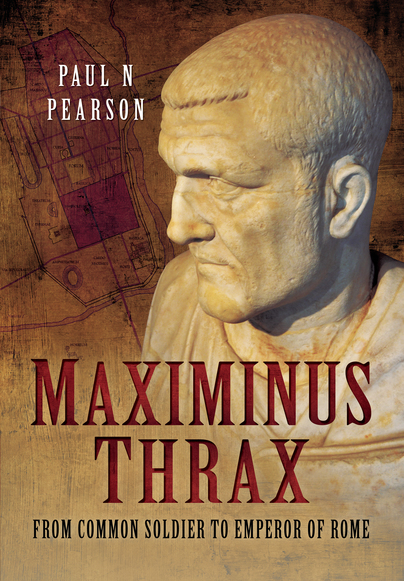 From Common Soldier to Emperor of Rome

Click here for help on how to download our eBooks
Add to Basket
Add to Wishlist
You'll be £4.99 closer to your next £10.00 credit when you purchase Maximinus Thrax. What's this?
Need a currency converter? Check XE.com for live rates

Maximinus was a half-barbarian strongman 'of frightening appearance and colossal size' who could smash stones with his bare hands and pull fully laden wagons unaided. Such feats impressed the emperor Severus who enlisted him into the imperial bodyguard whereupon he embarked on a distinguished military career. Eventually he achieved senior command in the massive Roman invasion of Persia in 232 and three years later became emperor himself in a military coup. Supposedly over seven feet tall (it is likely he had a pituitary disorder), Maximinus was surely one of Rome's most extraordinary emperors. He campaigned across the Rhine and Danube for three years until a rebellion erupted in Africa and the snobbish senate engaged in civil war against him. This is a narrative account of the life and times of Maximinus, from his humble origins up to and beyond the civil war of 238, written for enthusiasts of Roman history and warfare.

In this first book-length life of Maximinus, who ruled the empire for nearly three years (AD 235-238), Prof. Pearson (Cardiff), supplements the limited literary sources with evidence from archaeology, numismatics, and other disciplines to get beyond the “giant barbarian thug” image created by the notoriously unreliable Historia Augusta, to present a nuanced picture of the man within the framework of his times.

Pearson’s work is a narrative history of the life and times of Maximinus Thrax up to and past his assassination. It reads like a thriller, equipped as it is with various accounts of the treachery and assassination that were central to Roman politics.

Pearson covers the subject well, so well and in such an interesting manner that I am now looking for further reading concerning those times. The book itself is a great read and only real world time constraints (my day job) forced me to put it down at night.

My biggest surprise concerning Maximinus is that he has not been the subject of a movie yet.

A Great Account about the start of the 3rd Century crisis. 5/5 stars from me.

This is not a straightforward biography, but delves deep into the much-neglected history of the early 3rd century AD, drawing on all available sources of evidence and assessing their reliability. The book covers a wealth of topics and is extremely well researched and referenced. It is one of those books where you are not irritated by the clunkiness of the prose or the affectation of the author – instead, the text flows beautifully, making it a joy to read. This is potentially a prize-winning book that deserves to have an extensive readership and to be translated widely.

In the tumultuous third century of the common era, with the “barbarians” attacking the borders, the Roman empire desperately needed capable generals to lead her armies. Not infrequently, these generals were acclaimed “emperor” by their armies. Maximinus Thrax was one of the more fascinating of these general-emperors.

Maximinus Thrax (it means big-small man of Thrace), was reportedly half barbarian. He joined the Roman army as a common soldier, and came to the Emperor’s attention because of his size. He was reputedly almost 8 feet tall due to a pituitary disease which causes gigantism, a large jaw, and coarse bony facial ridges, all of which appear on coins with his image.

Maximinus rose in the army ranks due to his prodigious strength, bravery, and military ability. He became the general of the entire Roman army, and eventually overthrew his predecessor emperor, Alexander Severus, who was beloved by the people, but militarily incompetent.

Maximinus successfully campaigned against the Germanic tribes, attacking deeply into their territory, and modern archeology has found a battlefield (“The Harzhorn”) hundreds of kilometers further to the east than where Roman armies were thought to have campaigned.

Unfortunately, the costs of defending the empire required revenue raising measures which were deeply unpopular with the Roman people, and civil war resulted. After 4 years as emperor Maximinus was murdered, during a particularly vicious siege of the Roman city of Aquileia. Maximinus never set foot in Rome.

As a non expert reader, I found that this book thoroughly covered the subject, and was well written and thought provoking. There is a very interesting discussion about the requirements of leadership, including the roles of ruthlessness, brutality and terror, all which were characteristics of Maximinus Thrax, and had resonance in Macchiavelli’s writings and Nazi philosophy.

This is another terrific read from Pen and Sword.