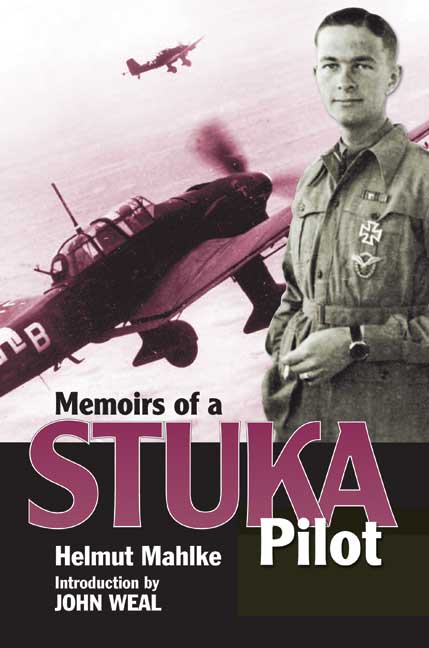 Memoirs of a Stuka Pilot (Kindle)

Click here for help on how to download our eBooks
Add to Basket
Add to Wishlist
You'll be £4.99 closer to your next £10.00 credit when you purchase Memoirs of a Stuka Pilot. What's this?
Need a currency converter? Check XE.com for live rates

After recounting his early days as a naval cadet, including a voyage to the Far East aboard the cruiser Köln, and as the navigator/observer of the floatplane carried by the pocket battleship Admiral Scheer during the Spanish Civil War, the author describes his flying training as a Stuka pilot.

The author's naval dive-bomber Gruppe was incorporated into the Luftwaffe upon the outbreak of war. What follows is a fascinating Stuka pilot's eye view of some of the most famous and historic battles and campaigns of the early war years: the Blitzkrieg in France, Dunkirk, the Battle of Britain, the bombing of Malta, North Africa, Tobruk, Crete and, finally, the invasion of the Soviet Union.

The author also takes the reader behind the scenes into the day-to-day life of his unit and brings the members of his Gruppe to vivid life; describing their off-duty antics and mourning their loss in action. The story ends when he himself is shot down in flames by a Soviet fighter and severely burned. He was to spend the remainder of the war in various staff appointments.

An engaging, engrossing and exceptionally informative book. A worthy addition to any military enthusiast's library and is unhesitatingly and heartily recommended.

The book is well-written and holds the reader's attention. There are also some excellent images, including colour sketches from the battlefield. It is a pilot's view but includes the detail and flavour of life within a squardron....This is an engaging book and a rare personal view of flying one of the most iconic aircraft of WWII.

Born in Berlin in 1913, HELMUT MAHLKE joined the German navy as a cadet in 1932 before being transferred to the Luftwaffe three years later. He spent his whole operational wartime career with one Stukagruppe. After the war, he played a leading role in establishing both the new Luftwaffe and Germany’s new naval air arm. He died in 1998.