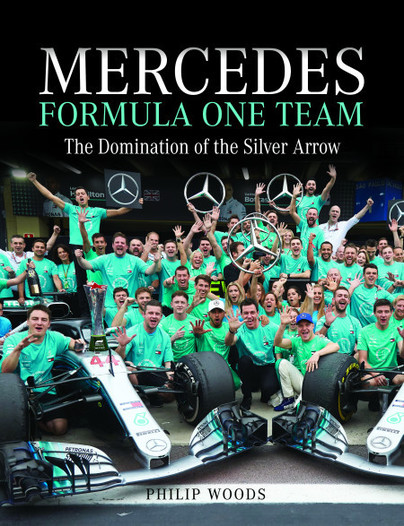 The Domination of the Silver Arrows

Preorder
Add to Wishlist
You'll be £17.50 closer to your next £10.00 credit when you purchase Mercedes Formula One Team. What's this?
+£4.50 UK Delivery or free UK delivery if order is over £35
(click here for international delivery rates)

From the pit crew to Lewis Hamilton, from the admin team to the engine designers, the Mercedes Formula One team have collectively won everything in sight since the new rules in 2014. Formula One moved away from the V8 2.4 litre and bought in the 1.6 litre turbo hybrids.

Mercedes hit the ground running in 2014, creating an engine and chassis that worked in sweet harmony, blowing away the field winning more than 84% of the races. Since the start of 2014 they have won every drivers championship and every constructors championship. When just a short time prior to that, Sebastian Vettel won 4 championships in a row with a dominant Red Bull, it was hard to imagine we'd ever see such dominance again, let alone so soon after.

Eyebrows were raised when Mercedes successfully signed Lewis Hamilton from McLaren, a team Lewis had grew up with and won his first title with. However, it seems that Mercedes persuaded Lewis they were on to a winner. Lewis Hamilton signing forced the great Michael Schumacher to hang up his helmet once again, but little did Hamilton know the significance, little did he know that move would put him up there with Schumacher as one of the worlds greatest drivers.

Drivers and teams have to work in harmony, and Mercedes had given Lewis Hamilton and Nico Rosberg a dream of a car.

This book celebrates Mercedes achievements with stats, information, interviews and most of all some beautiful images of perhaps that worlds greatest Formula One cars in action. A pictorial history of Mercedes Formula One Grand Prix victories. A chance to relive how two friends who grew up karting together would one day be creating history together.