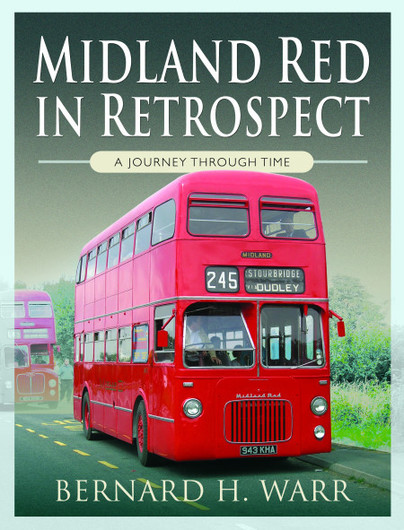 A Journey Through Time

Click here for help on how to download our eBooks
Add to Basket
Add to Wishlist
You'll be £15.59 closer to your next £10.00 credit when you purchase Midland Red in Retrospect. What's this?
Need a currency converter? Check XE.com for live rates

Midland Red in Retrospect covers the period during the 1960s when the Midland Red bus company dominated the Midlands, operating the lion’s share of the bus services and also the express coach services from the Midlands to London and other locations.

Like London Transport, Midland Red had a very distinctive image and its own fleet of vehicles designed exclusively for its operations. This volume is written by someone who worked for the company during this period and reflects the colour and atmosphere of this much-loved and well-remembered bus operator.

Sadly the author passed away in September 2020, before the book was published and this volume of Midland Red bus pictures is a tribute to him.

The author left school in 1960 and was lucky enough to be offered employment by the Midland Red. A keen bus enthusiast, the next four years proved to be some of the most satisfying of his career. Economic circumstance dictated a move away from the bus industry just before his 20th birthday, but in time railway engineering beckoned and he trained as a civil engineer with British Rail. Although with different masters this is a career path that he pursued for most of his life apart from a period as General Manager of the North Yorkshire Moors Railway in the late 1970s.