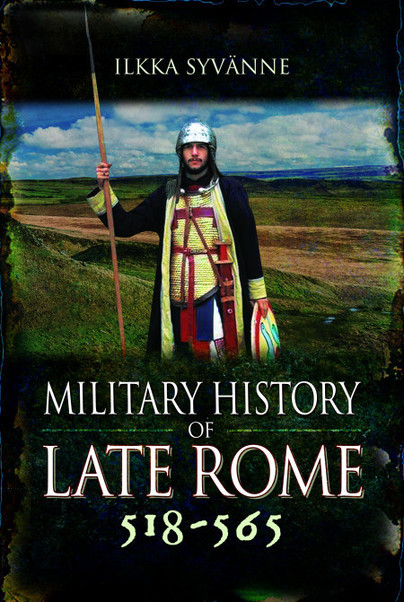 Click here for help on how to download our eBooks
Add to Basket
Add to Wishlist
You'll be £4.99 closer to your next £10.00 credit when you purchase Military History of Late Rome 518–565. What's this?
Need a currency converter? Check XE.com for live rates

I confess, I haven’t developed a major interest in the late history of the Roman Empire, particularly the portion of the empire’s story when it had split in two. Cursory reading found too many invasions going on and too many dudes crowning themselves emperor only to be usurped by someone else. However, a series is being published that might change my interest. Pen and Sword has teamed with Dr. Ilkka Syvänne, University of Tampere in Finland, to produce a seven volume Military History of Late Rome. Five volumes have been published so far, covering the period 284 AD to 518 AD. Book 6 takes the story out to 565 AD and is due in May 2021.

Syvänne starts each book with an overview of where the Roman Empire stood at the start of the period being covered; this includes administrative as well as the military situation. He then discusses details of the “enemies” Rome faced at this time. The first several books have far more information on the various threats from the Picts in the West, the Germanic tribes in the North, the Arabs in the South, and the various Persian empires in the east. Following those chapters, he delves into a narrative of the period covered by the particular book.

As you can probably imagine with a series of books extending over 300 years, trying to fit “what has come before” in each volume could have been extensive, so the author has simply given you a snapshot of where the book begins. So, you can end up with somewhat cryptic statements like this one from book four (425-457 AD) “The empire somehow managed to weather out the disasters caused by Honorius’s racist policies.” Begging of course the question, ‘what racist policies?” (hint: they’re in book #3 (395-425 AD.) If you are interested in a particular leader (say Constantine, or Justinian) knowing their dates will help you figure which book to get. If you’re interested in the whole period, start from #1 and read on. Syvänne has provided lots of maps and diagrams to aid your reading. This is a colossal work.

There are a couple caveats to my recommendation. First, the text is very dense. This is not light reading at all. The books have a lot of information in them and you can easily go into overload if you try to read and assimilate too fast. Taking it more slowly will reward you.

The second caveat is more of a warning. I have read other reviews of the series that call into question some of Dr Syvänne’s conclusions and assumptions; some of the questions simply point to not having enough detailed footnotes to track or confirm a source. As a non-ancient Roman expert, I really cannot comment on the questions. However, I found I enjoyed reading the narratives without the usual “this source says this” and “that source says that” and liked the author’s attempts to tell you when he disagrees with someone else’s conclusions. He has provided a good list of sources and endnotes to aid those who want to delve deeper into particular periods of this history. But delving into the details is what afficianado’s of the period will and should do for themselves. For readers interested in a very good overview of 300+ years of Roman history, this one is worth a look.