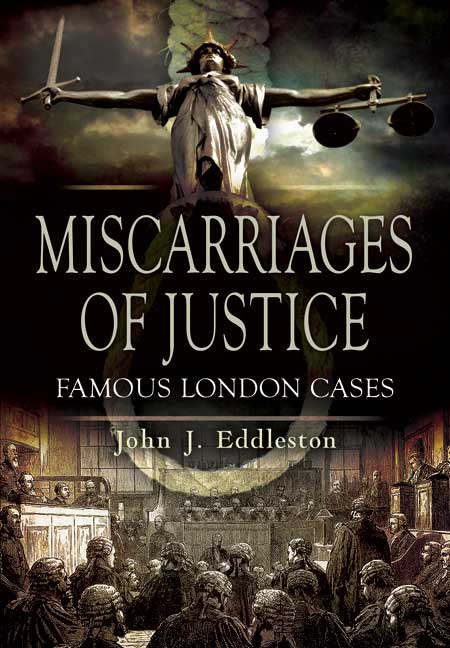 Click here for help on how to download our eBooks
Add to Basket
Add to Wishlist
You'll be £4.99 closer to your next £10.00 credit when you purchase Miscarriages of Justice. What's this?
Need a currency converter? Check XE.com for live rates

To face a trial for murder must be a terrifying prospect, all the more so when you know that you are innocent of the charge. How much more horrific must it be then, when you know that should you be found guilty, the sentence must be that you will lose your life at the end of a rope?

All of the cases reviewed in this book involved one or more individuals who were put on trial for taking the life of a fellow human being. The stories involve the eventual execution by hanging of nine men and one woman. To date, two of those men have been reprieved; too late for them and their families of course but, nevertheless, the state had admitted that it was wrong. What of the others?

What of Louisa Masset, the first person to be hanged in the twentieth century? Did she really murder the son she apparently loved so much? What of Frederick Seddon who went to the gallows still protesting that he was innocent of the murder of his lodger? And what of Harry Armstrong, hanged for murdering his fiancée on New Year's Day 1939?

The cases in this book all took place in London. Read the stories for yourself and remember that the law states that if there is a reasonable doubt, then it is the jury's duty to acquit. Was there not a reasonable doubt in some of the cases detailed here? Put yourself onto those juries and decide whether you would have still been prepared to stand in court and announce that dreaded word: 'Guilty!'

John J Eddleston is a prolific writer on criminal history in Britain. The author's aim in this insightful and educational book appears to give the reader the full facts of each historical case. The murder, the arrest, the interviews and the trial. The motive and opportunity put forward by the prosecution against the argument of innocence, the alibi's and the mitigating circumstances put forth by the defence. To let us, the readers, make up our own minds on the innocence or guilt of each one of these individuals.
In doing so, John J Eddleston not only provides an engaging account of each case, which alone provides an enlightening read, but provides discussion and opportunity for readers to consider the outcomes and their opinion on them. A pleasing element of this books is the many images included in each chapter. All black and white. they show the scenes of crimes, the victims as they lived before their demise and the alleged perpetrators. With the backgrounds, features and clothing on display, they all give a stark reminder of the era most of these crimes and trials took place in. In Miscarriages of Justice there is a sadness as you read through each well-formed chapter and understand the details of each case. Chapter provide excellent summaries without getting bogged down in too much detail. Eddleston has clearly carefully selected cases to include from the many available and has chosen well.

A well organised, researched and well presented book on the miscarriages of justice within the UK in the 20th century.