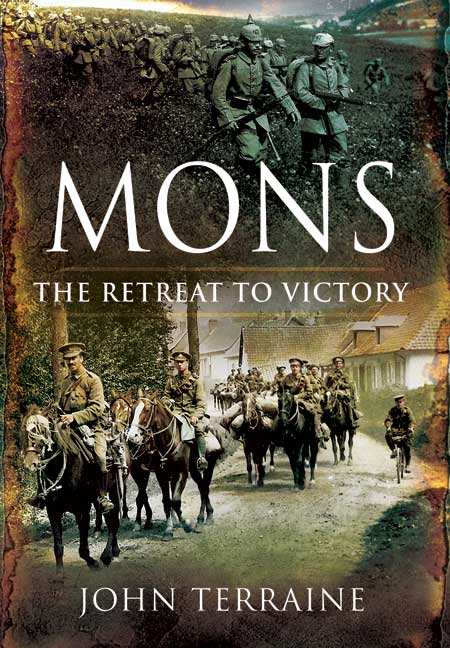 The Retreat to Victory

Add to Basket
Add to Wishlist
You'll be £12.99 closer to your next £10.00 credit when you purchase Mons. What's this?
+£4.50 UK Delivery or free UK delivery if order is over £35
(click here for international delivery rates)

The Battle of Mons takes its place in the history of the British army beside Corunna and Dunkirk. Initially, all three were defeats, saved from disaster by the courage of the soldiers and the skill of some of the commanders, and paving the way to great feats of arms and final success. In the context of the whole of the WW1, Mons was a small scale affair; comparatively short in duration, and resulting in casualties that were light indeed by the standard of later battles. But, from the British viewpoint, its importance was crucial, partly because it was the first time for close on a hundred years that a British Army had been engaged in warfare on the continent of Europe, and partly because that army passed straight from the dejection of defeat to the exhilaration of the Battle of the Marne – one of the decisive battles of the War.

This excellent book provides a detailed description of this significant battle that took place on the Western Front, and comprehensively chronicling the first engagement which the British army had with the Germans during the First World War... The content is wonderfully put together, giving an overview of the departure and arrival of the British Army on the continent, alongside the initial fog of war, the eve of Battle, and the events of Mons itself.  There is further fascinating background on the subsequent retreat. From the outset, the reader gains useful background on the Schlieffen Plan setting the context of the earlier phases of the war.

As a study of the battle, 'Mons' stands the test of time remarkably well... No question. If you have not read 'Mons', do so.

This reprint of a classic military history by one of the most outstanding historians of the last century tells the story of a retreat that ranks alongside Corunna and Dunkirk. The British Expeditionary Force - classed by the Germans as "a perfect thing apart" - fought a series of glorious rear guard actions against a vastly superior force. The events of this campaign shaped the British Army of today and this account captures the courage of the professional soldier of 1914 and the skill of his commanders. Recommended reading.

Unlike a lot of military historians who have managed to make careers out of very limited expertise, John Terraine was no one-trick-pony. As well as an authorative history of the RAF in the Second World War. Terraine also authors an impressive history of the U-Boat wars between 1914 and 1945. But his specialist area does seem to have been in the First World War. As well as being a staunch defender of Field Marshal Sir Douglas Haig, he also wrote a fascinating book on the Western Front in 1918, from the Kaiser offensive to the final victory on 11 November 1918.

Therefore this book, Mons: The Retreat to Victory, acts as an earlier bookend. It challenges many of our assumptions about the First World War, in particular the common misconception that the whole of the period from 1914 to 1918 was spent sat in trenches. The initial phase of the war saw the British Expeditionary Force moving up into Belgium, fighting stiff battles at Mons and Le Cateau before withdrawing back in relatively good order. The battles of Mons and Le Cateau have long been held up as disasters, but the analysis here is more balanced. Terraine suggests that the British Army gave the Germans a bloody nose indeed. Given that they were also outnumbered 3 to 1, the view of Mons as a disaster seems all the more strange/Cavalry also played a part in the wars early battles, contrary to popular conventions.

Despite its title this book isn't really about the Battle of Mons, which only occupies one of the book's ten chapters. The book actually looks at the entire first phase of fighting on the Western Front in 1914 as it affected the B.E.F., from the outbreak of war to the battle of the Marne, and gives the French experience as much coverage as the British.

Much of the emphasis is on the actions and attitudes of the senior commanders of the three armies involved - French, German, British - and how their pre-conception and misunderstandings influenced the campaign. The turning point in the war is thus seen as the moment at which Joffre began to realise what the real German plan was, while at the same time the Germans began to lose confidence.

Despite its comparatively tiny size the B.E.F. played a major part in these events because of its original position on the left of the Allied line. This brought it into contact with the right wing of the German army, much larger German forces, and the miscalculations that this produced amongst the German high command , helped to force the Germans into a position that allowed Joffre to launch the counter-attack that resulted in the miracle on the Marne.

Terraine's detailed account of the entire campaign allows us to see this happening - to see key German armies losing time on the march as they marched in the wrong direction to catch the British or to see how commanders on all sides ignored evidence of what was really happening on the ground.

The book also serves to remind us that this first phase of the war was very different from the familiar picture of the static trench warfare that came to dominate, but was instead a much more traditional 'war of manoeuvre'

John Terraine's role in military history was both long and distinguished. Not least he triggered the re-evaluation of Douglas Haig and brought both perception and understanding to his writing on 20th century conflict. This edition of Mons: Retreat to Victory, amazingly to this reviewer was first published no less than fifty years ago. Although written before access to war diaries, the author's research provided the first real, humanised, if Anglo-centric overview of the BEF's first battle and those who participated in it.

Surprisingly there has been very little subsequent deep analysis of the battle and Mons: Retreat to Victory has remained pretty much the standard work on the subject.

The Battle of Mons was the first major action of the British Expeditionary Force (BEF) in the First World War. The British army attempted to hold the line of the Mons-Condé Canal against the advancing German First Army. Although the British fought well and inflicted disproportionate casualties on the numerically-superior Germans, they were eventually forced to retreat due both to the greater strength of the Germans and the sudden retreat of the French Fifth Army.