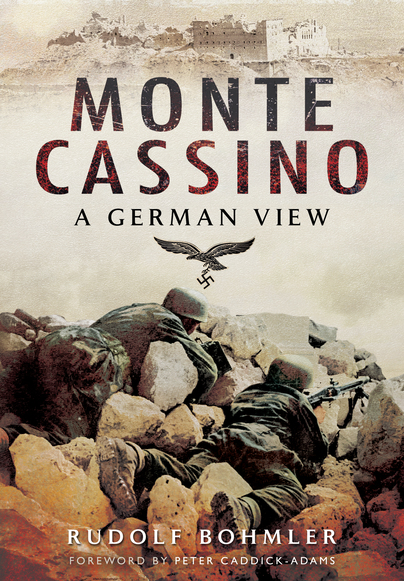 Add to Basket
You'll be £25.00 closer to your next £10.00 credit when you purchase Monte Cassino. What's this?
+£4 UK Delivery or free UK delivery if order is over £30
(click here for international delivery rates)

As a German battalion commander Rudolf Bohmler fought in the front line during the fierce battles fought at Monte Cassino. After the war he wrote this remarkable history, one of the first full-length accounts of this famous and controversial episode in the struggle for Italy. His pioneering work, which has long been out of print, gives a fascinating insight into the battle as it was perceived at the time and as it was portrayed immediately after the war. While his fluent narrative offers a strong German view of the fighting, it also covers the Allied side of the story, at every level, in graphic detail. The climax of his account, his description of the tenacious defence of the town of Cassino and the Monte Cassino abbey by exhausted, outnumbered German troops, has rarely been equalled His book presents a soldier's view of the fighting but it also examines the tactics and planning on both sides. It is essential reading for everyone who is interested in the Cassino battles and the Italian campaign.

The author writes with the passion of one who was there. The text is well supported by maps and photo-plate section that conveys the hotly disputed battle.

Monte Casino was one of the greatest sieges in history, and reading this book, a tenacious German defence in the face of massive Allied resources.

Bohmer is a fair writer and incorporates the Allied perspective and wider Italian campaign into his writing. The fact that he was there, of course, gives the book maximum authenticity. I also found his views on the controversial Allied bombing of the monastery to be of great interest.

Overall, an important book in history of World War 2, particularly for anyone with an interest in Monte Casino.

A very competent overview of the Italian campaign, with a special emphasis on the famed Monte Cassino action, by a former German Paratrooper who saw active service during this combat. Bohmler's fairness to both sides of the conflict is worthy of note, and of special interest is his viewpoint on the great controversy regarding the Allied bombing of the monastery. A valuable addition to our understanding of the second world war.

This book provides an excellent first-hand account of the fighting, woven into into a workmanlike overview of the strategies on both sides of the Gustav Line. Worth having.

Rudolf Bohmler (1914-1968) was a highly decorated German paratroop officer during the Second World War. He took part in the campaigns in Poland, France, Crete, the Soviet Union and Italy. After the war he compiled this graphic and authoritative account of the Monte Cassino battles in which he served as a battalion commander.