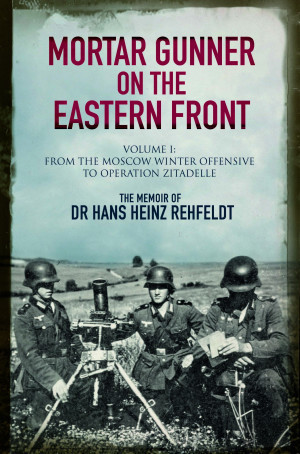 Click here for help on how to download our eBooks
Add to Basket
Add to Wishlist
You'll be £4.99 closer to your next £10.00 credit when you purchase Mortar Gunner on the Eastern Front. What's this?
Need a currency converter? Check XE.com for live rates


It is a remarkably detailed account of the daily life of a soldier who was thrown into combat almost as soon as he arrived on the front in November 1941.

One of the most impressive aspects of this book is the collection of wartime photographs, most of which feature the author, or are directly connected to him. Its unusual to get this many pictures that closely tied to the author of a book like this, and again it helps paint a picture of what life was like on the Eastern Front.

Hans Rehfeldt was 18 when he was despatched to Russia in October 1941 with the Grossdeustschland Division, and this is the first of two books which recount his experiences from the not often told perspective of a mortar team, and is based entirely on the diary which he illegally kept throughout the war. It begins with his optimistic departure for the front, but he soon became embroiled in the chaotic retreat from Moscow and, having suffered terribly in horrendous winter conditions, was one of only a small handful from his regiment to emerge unscathed and fit for service. During the following year, the rebuilt Division participated in the advance to the River Don, defended Kharkov after the defeat at Stalingrad, and the book closes with their part in the Battle of Kursk and the subsequent Russian offensive in the summer of 1943. Accompanied by Rehfeldt's large collection of personal photographs and sketched maps, this is a superbly told and detailed account, and in view of the actions in which he was involved, it is nothing short of a miracle that both Rehfeldt and his diary survived to tell it.

It’s interesting to read how he explains and processes his time in the army.