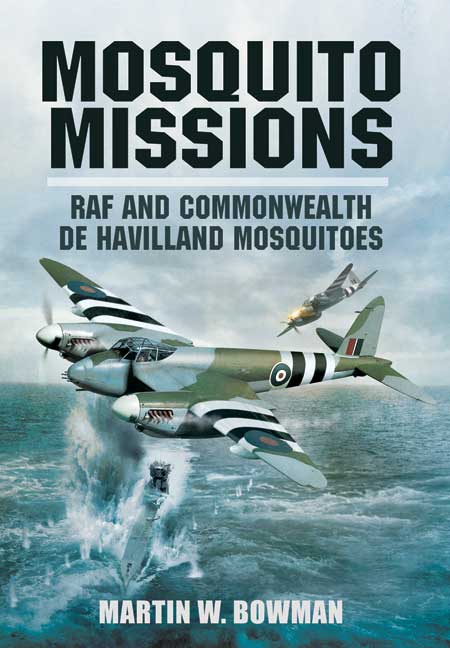 Click here for help on how to download our eBooks
Add to Basket
Add to Wishlist
You'll be £4.99 closer to your next £10.00 credit when you purchase Mosquito Missions. What's this?
Need a currency converter? Check XE.com for live rates

The ‘Wooden Wonder’ was probably the most versatile combat aircraft that operated on all fronts in World War Two and was still giving valuable service in first-line service after 1945 when it enjoyed a limited renaissance both at home, in Germany and abroad until the advent of jet aircraft.

Martin Bowman’s well-tried and respected formula of incorporating background information with scores of RAF, Dominion, and overseas pilots and navigators’ personal narratives, is employed here once again to great effect. Previously unpublished tales take the reader raid by raid on night-fighter, fighter-bomber, anti-shipping, path finder, photo-reconnaissance and precision bombing operations in the Middle East and jungles of the Far East, where the Mosquito carried out a series of thrilling post-war functions.

The book includes a series of evocative black and white images of the Mosquito in action, which supplement the text perfectly and work to illustrate the might of this iconic craft.

I get the impression that Martin Bowman has a deep seated respect, if not love for the De Havilland Mosquito. He has written books on the so called 'Wooden Wonder'before: Mosquito Mayhem, Mosquito: Menacing the Reich and Mosquitopanik! He owns a seemingly unending supply of interviews with the men that operated the Mosquito during WW2 and I am sure there will be more to come. I look forward to them because each of Mr Bowman's books on the "Mossie" is in itself unique.

Mosquito Missions is a collection of Second World War opertions in the words of the men that carried them out. It is these accounts that make this book such an interesting and absorbing read. I never tire of hearing from these men of the actual events.

There are some excellent colour and black and white photo's of the Mosquito which will appeal to all aviation followers.

Also included is some background of the various Mosquito variations. Used as a low level strike aircraft as well as its more regular uses: tactical bomber, night bomber, fighter-bomber, photo reconnaissance and pathfinder.

A really enjoyable book for all 'Mossie' and World War 2 aviation fans.

This is a book that covers what it says on the cover, but also includes former colony, the USA, and Mosquitoes after WWII in Switzerland and other countries. The author has established a formula that works very well for recounting the histories of classic warbirds. He incorporates background information with first hand accounts from Mosquito aircrew. This includes previously untold tales and provides a very interesting and entertaining book. To add to the valuable information and views, there are two fine photo plate sections, one in full colour.

The author has done a very good job in setting out this remarkable history and adding the human content of the crews who flew Mosquitoes. This is an important history, but it is also a book that can be read and enjoyed by those who may not hold aviation and warplanes as a primary interest. First class effort.