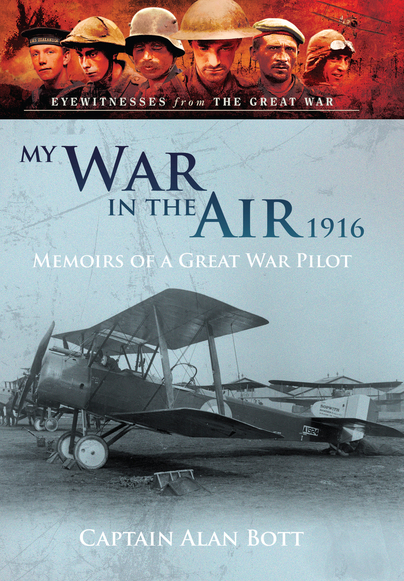 Memoirs of a Great War Pilot

Click here for help on how to download our eBooks
Add to Basket
Add to Wishlist
You'll be £4.99 closer to your next £10.00 credit when you purchase My War in the Air 1916. What's this?
Need a currency converter? Check XE.com for live rates

Originally published under the title An Airman's Outing, this magnificent title chronicles the daily life of the Flying Officer during the Great War. Touchingly dedicated to 'The Fallen of Umpty Squadron R.F.C.', Bott chronicles the lives and losses of his squadron as they carried out their duties over France in 1916. A modest and unflinching account of Great War aviation, Bott neither aggrandises nor dismisses any achievement of his crack squadron. A squadron that suffered so heavily, holding the record for casualties sustained by any flying squadron during three months, from the beginning of the war to the end of 1916 - a testament to the bravery and determination of the men who continued to serve within it.

Tinged by this sadness, My War in the Air 1916 still conveys the aspirations of the British Royal Flying Corps in their early days, and the hope its many flying aces placed in the establishment, as a powerful tool to defend and protect. As W. S. Brancker states inside, 'War has been the making of aviation; let us hope that aviation will be the destruction of war.'

The reader gets a piece of history unavailable anywhere else with an intimate, personal look inside the life of an unknown two-seater pilot from a century-old war. And that makes it priceless.

Bott, a World War I pilot who served with the British Royal Garrison Artillery
and Royal Flying Corps (RFC), describes the daily experiences of his RFC
squadron in France in 1916, from flying to France to their tasks doing long
reconnaissance, as offensive patrols around German air country, as escorts for
bombing craft, and in photography.

Alan Bott's first volume of wartime memories is a good and interesting read.