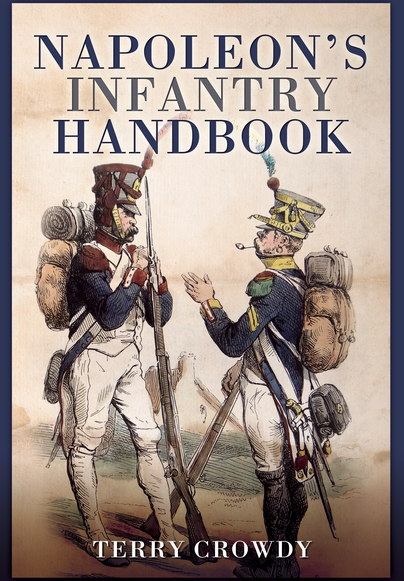 Add to Basket
Add to Wishlist
You'll be £25.00 closer to your next £10.00 credit when you purchase Napoleon's Infantry Handbook. What's this?
+£4.50 UK Delivery or free UK delivery if order is over £35
(click here for international delivery rates)

If not a field marshal's baton, what did Napoleon's soldiers really carry in their backpacks?

Napoleon's Infantry Handbook is an essential reference guide, filled with fascinating detail on the training, tactics, equipment, service and administration of Napoleon's infantry regiments. Based on contemporary training manuals, regulations and orders, Napoleon's Infantry Handbook details the everyday routines and practises which governed the imperial army up to the Battle of Waterloo and made it one of history's most formidable military machines.

Through years of research, Terry Crowdy has amassed a huge wealth of information on every aspect of the infantryman's existence, from weapons drill and maintenance, uniform regulations, pay, diet, cooking regulations, hygiene and latrine digging, medical care, burial of the dead, how to apply for leave and so on. This remarkable book fills in the gaps left by campaign histories and even eyewitness memoirs, which often omit such details. This book doesn't merely recount what Napoleon's armies did, it explains how they did it. The result is a unique guide to the everyday life of Napoleon's infantry soldiers.

This new title forms a most useful reference guide to the everyday life of Napoleon’s infantry, filled with detail on the administration, equipment, service, tactics and training of the regiments. Basing his work on contemporary training manuals, regulations and orders, the author details the everyday routines and practises which governed the imperial army and made it such a formidable military machine.

The text is divided into eight parts - Organisation & Personnel; Uniform, Arms & Equipment; Recruitment & Administration; Discipline & Honours; Tactical Organisation & Drill; Garrison Service; Service in the Field; Health & Medical Provision. Among the topics covered are such diverse subjects as the burial of the dead, cooking, diet, drill and maintenance, hygiene and latrine digging, medical care, pay, uniform regulations and how to apply for leave. There are 18 tables showing such items as the company administrative structure and the tactical composition of a battalion 1791. The text is supported by numerous monochrome line drawings and organisational/tactical diagrams, and is rounded off by a very useful alphabetical table of articles, as well as a select bibliography.

This book doesn’t just recount what Napoleon’s soldiers did - it explains how they did it.

The author has provided an enjoyable book from a mosaic of original manuals and material garnered from a number of sources. Any reader who has any interest in the Napoleonic period must read this book. However, it will also be a valuable source of information for military history enthusiasts who have a primary interest in other periods of history. Napoleon and his subordinates wrote their manuals from their own direct experience of soldiering and from the manuals that had been written earlier. The successes of Napoleon and his generals have also inspired later military figures to study the manuals produced to achieve those successes, and this has flavoured all of the manuals written since by armies around the world. A valuable addition to any library of military history – most recommended.

... This book provides all of the important elements that have been missed by campaign histories and personal memoirs of eyewitnesses. Personal memoirs are limited by the experiences of the writers and they will not have observed many important elements that were beyond their specialization, perhaps of lesser interest to them at the time, or perhaps beyond their vision.

The author is to be commended for amassing this huge volume of information on every aspect of military existence and for presenting it so clearly. There are many illustrations through the body of the book to support the text. It is difficult to think of any item that has been missed.

Napoleon's Infantry Handbook contains a wealth of information that is encyclopaedic in scope. In it you can find pay scales for all ranks, pay deductions, target practice, physical fitness training, daily routine in garrison, the duties of non-commissioned officers in combat, prisoners-of-war, how to tell if your beard had been mixed with something other than flour, the expected lifespan of issued clothing, how much weight a soldier carried based on his rank and position (e.g. grenadier, drummer, etc.) and a wide host of other topics.

Napoleon's Infantry Handbook is an invaluable source for anyone interested in the era. Whether the reader is a scholar, re-enactor, wargamer, or all three, they will find much to hold their interest and answer those questions they have had for a while! When I first picked up the book I thought I would just skim through it and read entries that caught my eye. However, the writing was so engaging before I knew it, I had read about 100 pages! Highly recommended!

An excellent guide to what life in Napoleon's infantry should have been like.

Despite the huge interest in just about anything related to the Napoleonic Wars, there are few books in the English speaking world that examine the French infantry of the period in the depth and detail as does this new title from Terry Crowdy. Similar works exist, but almost always consider the British Army of the period or Wellington’s army during the Peninsular War or at Waterloo and so on. It is, therefore, refreshing to see such a new study added to the considerable existing Napoleonic literature.

The book covers a very wide range of infantry related subjects, which are too numerous to mention in a review. However, a breakdown of the structure of the book may give the potential reader an idea of what is included. In total, there are eight parts to the book, including: organisation and personnel, uniforms and equipment, recruitment and administration, discipline and honours, tactical organisation and drill, garrison service, service in the field, and health and medical provision. Each of these parts are further sub-divided into two to five sections, each of which consider a specific aspect of the French infantry, including information on: infantry regiments, flags, promotion and rewards, rendering military honours, musketry, duties and routines, the day of battle, and medical treatment, amongst many others. Unlike other books that examine the Napoleonic armies, Crowdy has included far more than the usual comments on uniforms, equipment and weapons. The day-to-day duties and routines, both on and off campaign, are examined as are issues such as promotion, training, rewards, pay and punishment etc. Indeed, once read the reader is left wondering if there much else one can learn about Napoleon’s infantrymen.

The book is extremely well written and researched, being easy to read and free from heavy use of academic language that can put off some readers. The book has also been structured in a way that allows the reader to either read it from cover to cover or, if he or she prefers, to dip in and out of the specific sections of interest. It is a true reference work. One particular useful feature of the book is the use of cross-referencing Crowdy has employed at the end of each section, pointing the reader in the direction of other directly related information elsewhere in the book. Napoleon’s Infantry Handbook is an extremely interesting and enjoyable read that deserves a place on any Napoleonic bookshelf as well as a five out of five star rating.