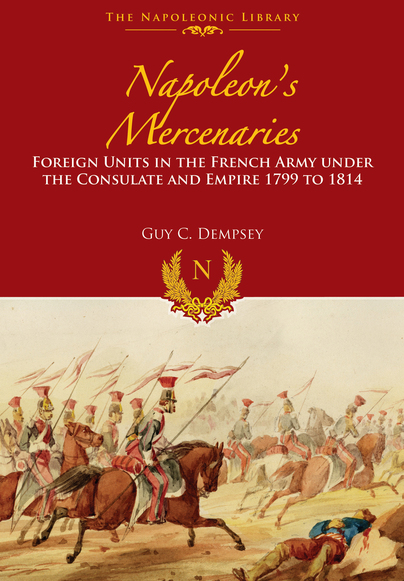 Foreign Units in the French Army Under the Consulate and Empire, 1799 to 1814

Add to Basket
Add to Wishlist
You'll be £25.00 closer to your next £10.00 credit when you purchase Napoleon’s Mercenaries. What's this?
+£4.50 UK Delivery or free UK delivery if order is over £35
(click here for international delivery rates)

This superb and comprehensive book details the foreign units which formed such an important part of Napoleon's forces. It examines each non-French unit in turn, giving an overview of the unit's origins, its organizational and combat history, its uniforms and standards, and details of the unit's eventual fate. Colourful accounts, taken from contemporary reports and memoirs, emphasize the qualities of the unit and throw light on what life was like for many of the foreign soldiers recruited into the Grande Armée. In total more than 100 different foreign units that served in the French Army are investigated in detail in this ambitious publication.

Some foreign units fought and flourished throughout the Consulate and Empire, whilst others lasted for just a few months. Covers Polish, German, Swiss, Italian, Spanish, and other units in the French Army and presents a combat history and details uniforms for each regiment.

Napoleon's Mercenaries is the best single-volume study of this aspect of Napoleon’s army and a vital reference for every Napoleonic enthusiast.

“Little can be found on the foreign units that were an integral part of the French army ... For a long time a gap has existed, but now Napoleon’s Mercenaries fills this gap.” Robert Burnham, Napoleonic Series.

First published in 2002 and now again in 2016, this title looks at the foreign units that formed an important part of Napoleon’s armies. Following his overview of Napoleon’s mercenaries, the author examines each non-French unit in turn, providing an overview of its origins, organisation, combat history, uniforms, standards and its eventual fate.

Napoleon’s foreign troops varied in quality, from the excellent Vistula Legion and Swiss regiments to the more dubious battalions of foreign deserters and Spanish prisoners of war. Some units fought and flourished throughout the Consulate and Empire, while others lasted just a short time.

Colourful accounts, taken from contemporary reports and memoirs emphasise the qualities of each of almost 100 of these units and throw light on what life was like for many of Napoleon’s foreign troops. Some 40 monochrome illustrations support the text, along with three Appendices (Organisation of Piedmontese Troops 1798-1801, Organisation of Lithuanian Forces 1812 and Foreign Troops in 1815), as well as a bibliography and index.

This really is a splendid book that provides a wealth of information on a fascinating topic, and comes highly recommended by this reviewer.

Guy Dempsey has collected an enormous amount of information on the mercenary units of the French army during the Napoleonic wars, and has presented it in an interesting manner. The book is well written and organised in such a way as to make the information easily accessible, and boasts a lengthy bibliography and good index...

... Dempsey's excellent study of Napoleon's mercenaries is a must for the serious Napoleonic scholar and will be of great interest to anyone interested in military history.

In all this book seems very comprehensive and thoroughly researched from a wide variety of primary and secondary sources. It also incorporates many interesting anecdotes related to the formations in question. It is not at all dry to read! . . . . In summary, if you have any interest in these colorful and unique units, whether singularly or collectively, this book would be a most welcome addition to your Napoleonic Library. Fascinating, and highly recommended.

Blunders on the Danube

Guy Dempsey is a banking lawyer by profession, but his avocation is the use of primary sources for the study of Napoleonic military history. Albuera 1811 is his fourth book and is the product of over two decades of research spanning numerous countries. He has also written numerous articles on First Empire topics.

As the subjects of his previous Napoleonic books suggest, Guy prefers to explore less familiar First Empire territory. Guy has an abiding interest in the military uniforms of the period and considers his ultimate goal to be the compilation of a definitive list of first-hand sources for research in that area.

Guy lives near New York City with his wife and three daughters.