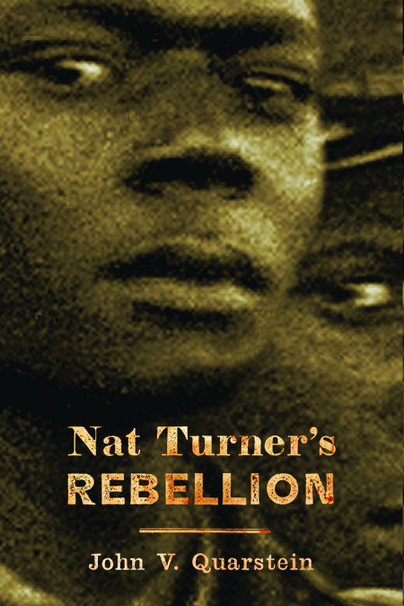 Preorder
Add to Wishlist
You'll be £20.00 closer to your next £10.00 credit when you purchase Nat Turner’s Rebellion. What's this?
+£4.50 UK Delivery or free UK delivery if order is over £35
(click here for international delivery rates)

Born in 1800 in Southampton County, Virginia, Nat Turner was one of millions of enslaved persons of African descent in the United States. Encouraged to learn to read and write, Turner immersed himself in the Bible and preached to his fellow slaves and others. Believing he had received several signs from God about his mission to overthrow the yoke of slavery, he organized the largest and bloodiest slave revolt in American history. On the evening of August 21, 1831, Turner and his closest followers descended on the farms and plantations in Southampton. Freeing slaves and killing slave-owning men, women, and children, Turner’s force grew to over sixty people. The insurrection, however, was quickly and brutally put down by local militia, after the deaths of fifty-seven whites and over one hundred blacks.

The court ordered the execution of fifty-six slaves, acquitted fifteen, and ordered the transportation of fourteen out of Virginia into slavery elsewhere. Turner himself was not cap- tured until October 30, tried on November 5, and hung on November 11, 1831. Nat Turner’s Rebellion brought the issue of slavery to the forefront of American politics, with the Virginia General Assembly nearly ending the institution during its 1832 session. New York and Great Britain out- lawed slavery in 1834, while the need to resolve the slavery issue prompted a widespread expansion of abolitionism, resulting in the end of slavery in the United States in 1865.

In Nat Turner’s Rebellion, historian John V. Quarstein weaves Nat Turner’s own confession, court records, newspa- per accounts, official papers, and his decade-long work with the Southampton County Historical Society into a fresh portrayal of the causes and aftermath of the uprising.

Occurring thirty years before the Civil War, Turner’s actions gave greater focus to the anti-slavery movement that result- ed in a divided nation, war, and the end to America’s “pecu- liar institution.”

JOHN V. QUARSTEIN is an award-winning historian, preser- vationist, and author. He is director of the USS Monitor Center at the Mariners’ Museum in Newport News, Virginia, and has served as an adjunct professor at the College of William & Mary. He is author of fifteen books, including Fort Monroe: The Key to the South and The Monitor Boys, winner of the Henry Adams Prize for Excellence in Historical Literature. He is also a recipient of the National Trust for Historic Preservation’s President’s award.