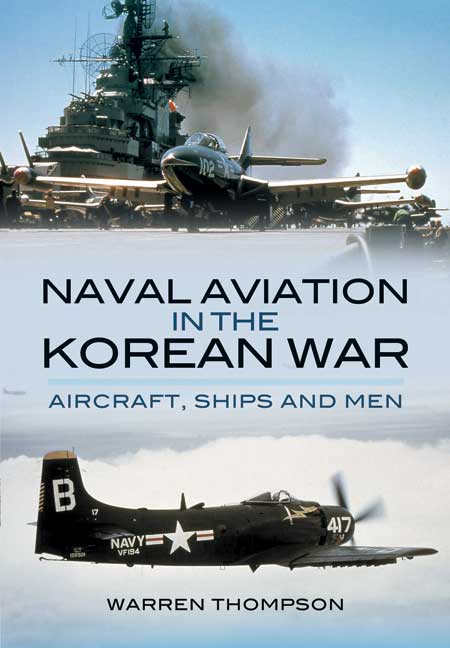 Click here for help on how to download our eBooks
Add to Basket
Add to Wishlist
Get Naval Aviation in the Korean War (Kindle) for FREE when you purchase 2 other eBooks.
Need a currency converter? Check XE.com for live rates

The first part of this book covers the role of US aircraft carriers and aircraft in stopping the North Korean initial push to the south and also their role in the famous Inchon Landing and Pusan Perimeter Break out. The last part of the first chapter deals with naval operations during the Marine's Chosin Reservoir march to the sea in December 1950. The book goes on to describe the stabilization of the front lines after the Chinese had entered the war during 1951. At this time, the emphasis for naval air operations is centered on interdiction behind the lines. The focus is on trying to stop road and rail traffic from re-supplying the communist troops and allowing them to build up to a major offensive. Also, it includes the entry of the F2H Banshee into carrier operations which gave the USA four major types of aircraft to wage the war. During 1952 most carrier air groups spend their time off the coast of North Korea while hitting targets up along the Yalu River. This puts them well within the range of the MiG-15's. Navy F9F Panthers were used as top cover while the Corsairs and Skyraiders went after major targets such as the dam complexes up river and marshalling yards north of Pyongyang. During 1953 naval air operations were stepped up in an effort to get the communists back to the truce talks. The number of MiG-15's had grown to a figure many times that of the UN for overhead protection. The deep missions were more dangerous than ever and the Chinese brought in state of the art anti-aircraft automatic weapons. The number of sorties flown by the US Naval aircraft increased over the previous year's record numbers. The war ended on July 27, 1953.

This history of carrier operations off the coast of North Korea draws on recollections from pilots who flew the missions and their support personnel. Appendices list US Navy carrier deployments in the Korean War, US Navy aircraft lost in the Korean War, and aircraft shot down by Navy pilots in the war. The book includes color and b&w historical photos. Author Thompson is a military aviation historian.

Warren Thompson, a noted military aviation historian, has produced this superb book on U.S. Navy aircraft carrier aviation during the Korean War. The book outlines extensive coverage of U.S. Navy flight operations. To bring the text alive and delight the reader, the author delved into his extensive photo collection and provided the reader with more than 90 colour pictures and 80 black-and-white images of Korean War people, aircraft carriers, carrier planes and target damage. The vast majority of these images was collected by the author from the participants themselves and never seen before. I cannot recommend this book more highly. It is an excellent account of Navy carrier aviation during the Korean War – factually and from a personal viewpoint. It is filled with details a historian will enjoy, and stories and images aviation enthusiasts will thrill to.

The author has dug up ancedotes of the flyers and unpublished photos – many in full colour – of the carrier-based aircraft that enrich this account. The book is also well-stocked with appendices, including lists of carrier deployments, aircraft losses and aerial victories.