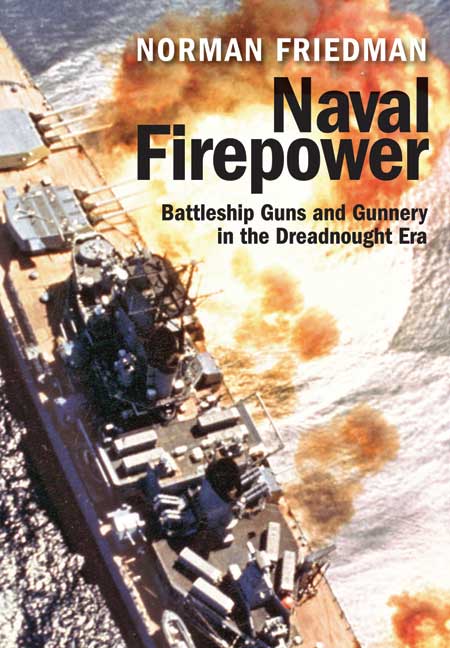 Battleship Guns and Gunnery in the Dreadnought Era

Click here for help on how to download our eBooks
Add to Basket
Add to Wishlist
You'll be £4.99 closer to your next £10.00 credit when you purchase Naval Firepower. What's this?
Need a currency converter? Check XE.com for live rates

For more than half a century the big gun was the arbiter of naval power, but it was useless if it could not hit the target fast and hard enough to prevent the enemy doing the same. Because the naval gun platform was itself in motion, finding a 'firing solution' was a significant problem made all the more difficult when gun sizes increased and fighting ranges lengthened and seemingly minor issues like wind velocity had to be factored in. To speed up the process and eliminate human error, navies sought a reliable mechanical calculation.

This heavily illustrated book outlines for the first time in layman's terms the complex subject of fire-control, as it dominated battleship and cruiser design from before World War I to the end of the dreadnought era. Covering the directors, range-finders, and electro-mechanical computers invented to solve the problems, America's leading naval analyst explains not only how the technology shaped (and was shaped by) the tactics involved, but analyses their effectiveness in battle. His examination of the controversy surrounding Jutland and the relative merits of competing fire-control systems draws conclusions that will surprise many readers.

He also reassesses many other major gun actions, such as the battles between the Royal Navy and the Bismarck and the US Navy actions in the Solomons and at Surigao Strait. All major navies are covered, and the story concludes at the end of World War II with the impact of radar.

This is a book that everyone with a more than passing interest in twentieth-century warships will want to read, and nobody professionally involved with naval history can afford to miss.

The text is augmented throughout with a very large number of excellent photographs, drawings and plans, the captions of which are very informative...Enthusiasts for naval architecture will find the range and quality of images reproduced in this work alone to be almost certainly worth the price of the volume.

This new edition of 'Naval Firepower' comes as recommended, as it did before: it's reasonably priced, well presented and contains much interesting information that should earn it a place on many shelves.

This is a fascinating account of a complex but crucial aspect of naval warfare during the two world wars, and will be of great value to anyone interested in that subject.