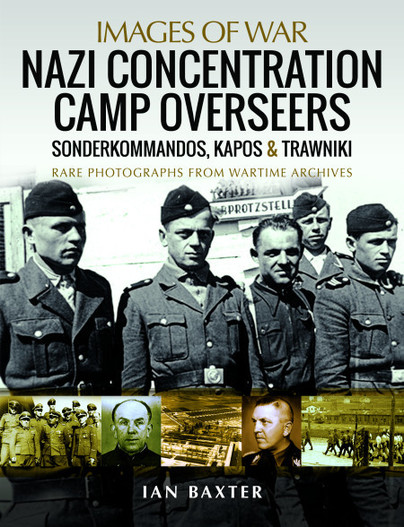 Click here for help on how to download our eBooks
Add to Basket
Add to Wishlist
You'll be £4.99 closer to your next £10.00 credit when you purchase Nazi Concentration Camp Overseers. What's this?
Need a currency converter? Check XE.com for live rates


This is a difficult read, about the men who condemned millions to death during WW2. Luckily we have long memories and will never forget what these inhumane monsters did during the war...

Nazi Concentration Camp Overseers by Ian Baxter – Sonderkommandos, Kapos & Trawniki – Rare Photographs from Wartime Archives is a must read for everybody. It’s a fantastic book with clearly presented details and horrifying pictures. The difference between the Nazi and Trawniki (collaborators) smiling at the camera and the pictures with Jews is staggering. What I liked the most about this book is that the information is presented in a clear and non-judgemental way, without any sensationalistic remarks. The images speak for themselves when it comes to the horror of reality, so there is no need for anything else.

Now I have read a number of these books and everyone has been first class, they should in my opinion be more well known and this book is just the same, with a slight difference. The difference in this book is that it feels like it’s more concentrated on one particular subject rather than a broad sweep trying to include everything. This book has concentrated on what were classed as ‘overseers’, or more honestly volunteers. That’s right it appears you had soldiers that would have to do this job as in working in a concentration camp, no you would have those that weren’t soldiers volunteering to do the jobs in a concentration camp.

These ‘volunteers’ were split into groups and then each group were given a number of jobs to be in charge of ranging from moving people around to be killed, being in charge of the ovens, organising transport in and out, being guards, selecting victims or organising forced labour projects. There wasn’t really anything light, it was all rather grim stuff some people were more than happy to do. I found this fascinating mainly because it’s hard to imagine what people will do, it was interesting to learn more about other camps rather than the main few that sadly make the headlines like Auschwitz and Belsen. I would really recommend this book although very sad, and I found it very interesting, certainly one I would recommend.