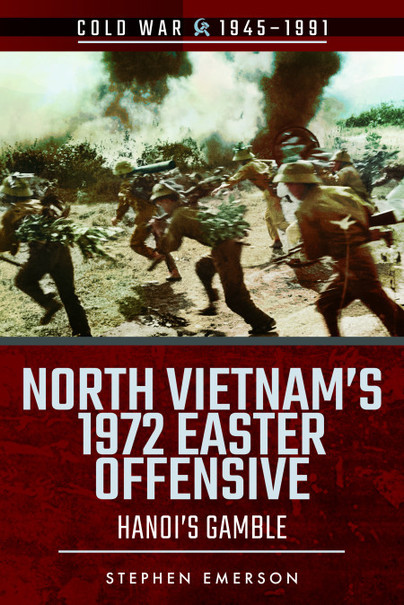 Click here for help on how to download our eBooks
Add to Basket
Add to Wishlist
You'll be £4.99 closer to your next £10.00 credit when you purchase North Vietnam's 1972 Easter Offensive. What's this?
Need a currency converter? Check XE.com for live rates

By the end of 1971, in what Hanoi called the American War and at the height of the Cold War, the fighting had dragged on for eight years with neither side gaining a decisive advantage on the battlefield and talks in Paris to the end the war were going nowhere. While the United States was steadily drawing down its ground forces in South Vietnam, Washington was also engaging in a grand effort to build up and strengthen Saigon’s armed forces to the point of self-sufficiency. Not only had the ranks of Saigon’s forces swelled in recent years, but they were now being equipped and trained to use the latest American military equipment. Perhaps now was the time for Hanoi to take one last gamble before it was too late.

With the rumble of men and mechanized equipment breaking the early morning silence, some 40,000 North Vietnamese troops advanced across the demilitarized zone into South Vietnam on March 30, 1972 in what would become the largest conventional attack of the war. Ill-prepared and poorly led, South Vietnamese troops in the far north were quickly routed in the face of the ensuing onslaught. Likewise, coordinated attacks across the Cambodian border northwest of Saigon and into the central highlands in the coming weeks gained steam and in due course as many as 200,000 men along with T-54/55 main battle tanks, 130mm towed artillery, ZSU-57 self-propelled ant-aircraft guns, and hundreds of trucks and armored personnel carriers were engaged across three battlefronts. Soon Saigon’s beleaguered forces were being pushed to the brink of defeat in what appeared to be the end for the Thieu government. Ultimately, however, the timely and massive intervention by U.S. and South Vietnamese air power, along with the bravery of some South Vietnamese commanders and their American advisers saved the day. Hanoi’s gamble had failed and in its wake lay up to 100,000 dead and South Vietnamese roads littered with the smoldering wrecks of North Vietnamese military equipment. Moreover, it would be another three years before the North had recovered enough to try again.

The lessons from Hanoi's military victory, which are discussed in this book, still echo in today's U.S. military intervention in Afghanistan, so this book's account is especially pertinent in understanding the current predicaments facing the U.S. in that troubled country.

The book like all those in the series is extremely valuable and informative. The military episode in the book take us to a historical period of the Vietnam War which is rarely spoken of and which Emerson narrates beautifully.

Steve Emerson's latest contribution to the military history of the Vietnam War answers crucial questions about Hanoi's strategic decision-making and reasons why South Vietnam was able to withstand an onslaught that many thought would be its undoing. His fascinating narrative lifts the fog of popular historical memory to explain how Saigon survived in the near term yet failed to overcome the weaknesses revealed by the 1972 Easter Offensive. This is a must-read for students of the conflict.

A part of the outstanding Pen & Sword 'Cold War 1945-1991' series, "North Vietnam's 1972 Easter Offensive: Hanoi's Gamble" informatively presents an episode of the Vietnam War that has otherwise lapsed into obscurity, crowed out of the history books by North Vietnam's ultimate victory against the U.S. and South Vietnamese military. Illustrated throughout with black/white historical photographs, "North Vietnam's 1972 Easter Offensive: Hanoi's Gamble" is an extraordinary and unreservedly recommended addition to both community and academic library Vietnam War collections and supplemental curriculum studies lists.

Stephen Emerson’s message in North Vietnam’s 1972 Easter Offensive: Hanoi’s Gamble is that the Army of the Republic of Vietnam (ARVN) could not have defeated North Vietnamese Army (NVA) invaders without airpower provided by the United States. He repeatedly cites B-52s—which averaged 76 sorties a day during June, July, and August 1972 and carpet-bombed within 600 yards of friendly forces—and Spectre AC-130 gunships as the deciding factors.
He describes the Vietnam War in 1972 as a now-or-never situation. Four years of talks between American and North Vietnamese diplomats had produced little progress, Emerson says. Both sides felt a proclivity for a military solution to the war. Vietnamization had put the onus on the ARVN to defend its nation with help from a comparatively few American advisers.
Massing its largest concentration of troops, tanks, and artillery of the war, the NVA invaded, and drove the wavering ARVN to the brink of defeat in Military Regions 1, 2, and 3 until American air power intervened.
An angry President Richard Nixon initiated Operation Linebacker to step up bombing inside North Vietnam. Air Force and Navy fighter-bombers crippled transportation and supply systems by collapsing bridges, cutting rail lines, and destroying stockpiles of war goods. However, the more immediate airpower need required killing enemy invaders on the ground in South Vietnam, which the B-52s and AC-130s did most effectively.
With support from maps, Emerson explains the ebb and flow of fighting during the middle six months of 1972. He presents detailed accounts of the fall of Quang Tri and the defense of Hue, the battle for Kontum, and the siege of An Loc. To me, the most interesting part of the book he titles “Saigon Counterattacks” in which the ARVN broke free from the Hue pocket, outlasted the NVA attackers at An Loc, and recaptured Quang Tri to end the Easter Offensive.
Emerson’s research principally relies on American sources. I would have appreciated more input about the thinking of North Vietnamese military and political leaders. Otherwise, North Vietnam’s 1972 Easter Offensive is an excellent summation of an averted disaster. Practically every page of the book contains a black-and-white photograph, and an eight-page gallery in the middle of the book offers color photos. That collection of images ranks among the best I have seen in a Vietnam War book.
For several weeks during the Easter Offensive, I was part of a three-man team on special assignment from Hurlburt Field in Florida to locate NVA 130-mm artillery in a Spectre gunship. I went on two missions to An Loc and found the fighting more frantic than anything I had experienced during my previous year’s tour with Spectre, which included the Lam Son 719 debacle. At the same time, in-country operations exuded a grim determination. Emerson’s extensive history helped me to realize why our mission failed: We had not seen the big picture all those years ago.
Emerson closes the book with discussions about diplomatic stalemates, Linebacker II, and a post-mortem. He did not need to do so. The ARVN’s poor performance during Lam Son 719 in 1971 and its inability to act independently against the 1972 Easter Offensive foreshadowed exactly what was to come after the NVA rebuilt its forces.

The genius of Emerson in this work, as in his others on the Vietnam War, is evidenced in his ability to reconstruct battlefield scenes with such granularity that they come alive on the pages, and one is left to admire the scale and depth of the research that went into work. Although the book has an American point of view, the analyses of the advances and reverses of military engagements such as Operation Lam Son 719, and the sieges of Quang Tri, Hue, An Loc, and Kontum, are convincingly dispassionate. Emerson ungrudgingly credits the North Vietnamese forces with the type of determination and tenacity that the US-backed defenders lacked. That the North Vietnamese forces failed in achieving their battlefield objectives and the concomitant bargaining strength at the peace talks with the Americans was owing to American air power, which finally brought back the North Vietnamese leaders to the negotiations that eventuated in an agreement. Together with his other works on the Vietnam War, North Vietnam’s 1972 Easter Offensive, represents a major contribution to the historiography on the Vietnam War.

Stephen Emerson’s latest book entitled “North Vietnam’s 1972 Easter Offensive” is outstanding. It is well researched and well written and covers the time in 1972 when North Vietnam came very close to winning everything it sought to achieve by striking a decisive blow to South Vietnam’s government and thus force the United States to capitulate to the North’s terms for ending the war.

Instead, South Vietnamese forces rally by fighting effectively inspired by new leaders in key positions and aided by many brave American advisors on the front lines. At the same time, President Nixon doubles down with an expanded commitment of air power that takes advantage of the massing of the North’s conventional troops and smashes them and their supply lines. This defeat on the battlefield along with Nixon’s decision to attack North Vietnamese targets in Hanoi and Haiphong cause North Vietnam’s Le Duan to reassess and return to the negotiating table.

Emerson does a superb job describing all that takes place during this critical time period that places South Vietnam in a position to maintain its independence in 1972. I highly recommend this book that describes not only an important time in our history, but has many parallels to the situation we find ourselves in with Afghanistan currently.

Well illustrated throughout, including a section of colour photos in the centre of the book.
An interesting read. The story of the Vietnam War is a long one, and had many aspects. This book concentrates on just one series of events, prior to the final NVA success in 1975. A good read.

By the end of the 1971, the Vietnam War had raged for eight years without either side gaining a decisive advantage, and the Paris peace talks were achieving little if anything.

The United States was withdrawing it’s own ground forces in South Vietnam at this point, while trying to train, strengthen and equip the South Vietnamese Army.

If ever North Vietnam was going to invade South Vietnam, it would have to be before the South got too strong.

On March 30, 1972, North Vietnamese forces invaded South Vietnam, making considerable gains, it was now only a matter of time for the South.

Well-written and illustrated, this book brings a crucial event in the Vietnam War to vivid life.