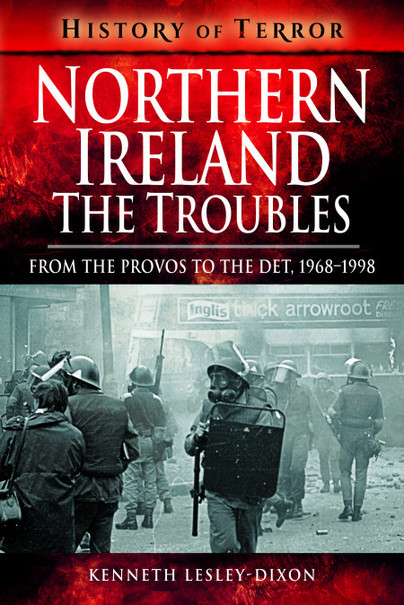 Click here for help on how to download our eBooks
Add to Basket
Add to Wishlist
You'll be £4.99 closer to your next £10.00 credit when you purchase Northern Ireland: The Troubles. What's this?
Need a currency converter? Check XE.com for live rates

Care is made, by the author, to not take a side for the most part, any of the various paramilitary “murder squads” are all painted as ruthless and somewhat evil in their doings. I appreciated this, as most books on terrorism, and counter-insurgency that I’ve read are very one-sided and downplay the reasons behind the behavior. I wasn’t expecting a pro-Britain book or anything, but the honesty was refreshing.

I enjoyed this book a lot, It’s very dense with information and covers a lot of ground.

An absorbing and informative read!

This book is well researched and well written. I was a youngster at the beginning of the troubles so looked forward to learning more about the topic. The book details the troubles from their beginning to the ceasefire, expertly describing both sides of the conflicts. The collusion of the uk government was a revelation to me although not completely incredulous.

For thirty years 'The Troubles' in Northern Ireland was a regular part of our daily news reports and media coverage, whilst one or two groups frequently made the headlines there was a number of other agencies and players involved in this 'dirty war' and this book doesn't just look at the main players it looks at who else was there, how they came to be and what their role was.

There are many books about this period of history and I found this one interesting because it identifies in three sections; Nationalist paramilitaries, Loyalist paramilitaries and the third covering the various military, police and intelligence agencies, focusing not only on the main units and organisations but also the lesser known ones, telling what they did and what connections they had with each other. The closing chapters deal with the inquiries that followed and how they themselves were hampered by lies and deceit, with many documents being deliberately misplaced or destroyed in an attempt to cover-up actions and events that took place.

A well written and thought provoking account not just for those that were there but also for anyone who has an interest in this not so distant part of our history.

I knew that this was a book that I wanted to read as soon as I read the blurb for the book and I was not disappointed – it was full of interesting facts and detail and I had it read in a day.

I liked the layout of the book and as I was reading it, I was encouraged to look on the internet and find out more on a few of the news stories and it was great to see the photos that were added to bring the period to life. I liked the author explaining too the focus of the troubles and that it is not just a simple case of Protestants v Catholics too as many are still led to believe.

I think that photos are really needed in a book like this to demonstrate the human impact more that just words can do – after all they are right in that a picture is worth a thousand words even if some of these images used are upsetting, they are right to be added.

The Troubles were already going on when I was born so I didn’t know that much about the back story, only what I had previously read so it was great to be able to read a book that focussed on the origins through to the signing of the Good Friday Agreement (which actually being signed on my 16th birthday) and the issues that took place after this until a ceasefire a halt was finally called by the main protagonists.

It is 5 stars from me for this one, I found it to be an additive read even of the subject matter at times was tough and the impact of some of the actions on the innocent families involved is truly harrowing.