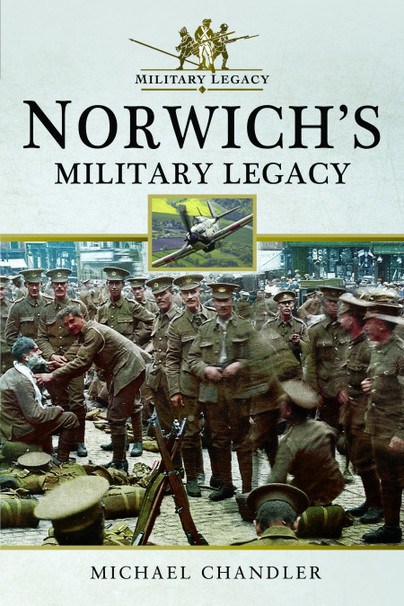 Click here for help on how to download our eBooks
Add to Basket
Add to Wishlist
You'll be £4.99 closer to your next £10.00 credit when you purchase Norwich's Military Legacy. What's this?
Need a currency converter? Check XE.com for live rates

Originally a town that was built of wood by the Anglo-Saxons, it was later burned down and then rebuilt as England’s second city, after London, by William the Conqueror. Riots between the church and the citizens saw Norwich at war with the Pope in 1272 when a gate was constructed as a penance. The Norfolk Regiment has seen its men in combat from the Napoleonic Wars, the Crimean War, the Boer War and both World Wars. The more recent conflicts in the Falklands, Iraq and Afghanistan have also witnessed the bravery of the Norfolks. A comprehensive list of military personnel who gave their lives is examined, including Norwich-born Second Lieutenant Wilfred Edwards VC, as well as an account of 9694 Private John Henry Abigail of the Norfolk Regiment who, on 12 September 1917, aged 21, was executed for being AWOL. It would not be until November 2006 that Private Abigail was pardoned by the British government.

A basis to learn about the military importance of The City of Norwich in history.

Norwich is now my adopted city, of course, having lived in North Norfolk for the last 25 years. Michael Chandler looks at Norwich's military history through the centuries in a vibrant and very readable account. Absolutely essential reading for social historians and local people alike.

Michael Chandler is an author, historian and broadcaster. He has written over a dozen books on Norwich and Norfolk since 2010, his most recent being Historical Women of Norfolk (2016). He was Historical Adviser to Future Radio and has been involved with Mustard TV, BBC Look East, BBC Radio Norfolk, Radio Norwich and ITV Anglia. As well as writing for several other magazines, Michael is a features writer for A Fine City where he is also the restaurant and food critic. A vegetarian and animal lover, Michael’s hobbies include history, art, cinema, theatre, reading, cooking, walking and music from the 1960s.