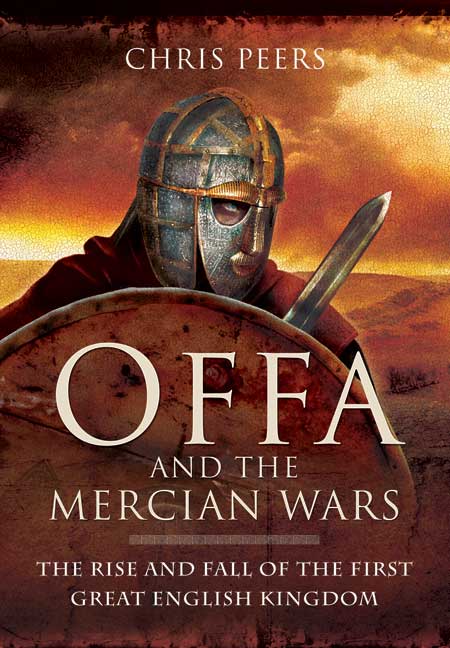 Offa and the Mercian Wars (Kindle)

The Rise and Fall of the First Great English Kingdom

Click here for help on how to download our eBooks
Add to Basket
Add to Wishlist
You'll be £4.99 closer to your next £10.00 credit when you purchase Offa and the Mercian Wars. What's this?
Need a currency converter? Check XE.com for live rates

In England in the eighth century, in the midst of the so-called Dark Ages, Offa ruled Mercia, one of the strongest Anglo-Saxon kingdoms. For over 30 years he was the dominant warlord in the territory south of the Humber and the driving force behind the expansion of Mercia’s power. During that turbulent period he commanded Mercian armies in their struggle against the neighbouring kingdoms of Northumbria and Wessex and against the Welsh tribes.

Yet the true story of Offa’s long reign and of the rise and fall of Mercia are little known although this is one of the most intriguing
episodes in this little-recorded phase of England’s past. It is Chris Peers’s task in this new study to uncover the facts about Offa and the other Mercian kings and to set them in the context of English history before the coming of the Danes. He describes how the tribes of middle England were welded together by Penda, one of Offa’s remarkable predecessors, and how Mercia developed into a cohesive militaristic society which defended itself and preyed on its neighbours. A line of strong kings – Wulfhere
Aethelred and Aethelbald – followed and laid the foundations for the kingdom Offa took over in 757.

Warfare came naturally to these men – they were born into a warrior tradition – and Chris Peers pays particular attention to this key element in Mercian society. Also, of course, he discusses the most famous monument that has come down to us from Offa’s reign – the defensive dyke constructed in the west of England to deter the incursions of the Welsh.

His fresh account of this neglected era in English history draws together the results of the latest archaeological research and the sparse documentary evidence that has survived. It makes fascinating reading.


The rise and fall of the first great English kingdom, Mercia, ruled by Offa for nearly thirty years. A king who has remained largely in obscurity known to most of us only from Offa's Dyke, the massive earthwork along the border with Wales from the Dee estuary in the north to the Wye in the south, though not everyone agrees this was all Offa's work. He came to the throne after a period of civil war following the assassination of Aethelbald and defeating the other claimant, Beornred in 757, and ruled until his death in 790. The author ponders that if Offa had left a long-lived heir and a secure line of succession might Anglo-Saxon England been able to resist both the Vikings and the Normans. Now there is a thought for you.

This is another in the great Pen and Swords historical series, publications which focus largely on military, as well as ancient history.

The name Offa is probably most well known as being related to Offaâ€™s Dyke, the earthwork running along the border with Wales. Offa was just one of the rulers of the kingdom of Mercia, and this book covers very engagingly the rise of the rulers, their accomplishments and the peak under Offa, then the succession to the arrival of the Vikings and the climb to power based largely on Wessex.

Clearly a lot of any such reconstruction is just that; based on insufficient and sometimes conflicting sources, the author must balance the writings of such as Bede, the Anglo-Saxon Chronicles, and later writings such as those of Gildas, as well as archaeological evidence such as the finds at Sutton Hoo and the Staffordshire Hoard. This book is a good attempt to recreate a coherent historical narrative, which also features chapters with insights on the warriorâ€™s arms and armour, and the theory of war in the seventh to ninth centuries.

This is an extremely interesting book, which I would recommend to anyone interested in finding out more about the period, particularly the Mercian kingdom itself. The author has included brief chronological histories of the kingdom under the rule of such as can be identified, from Cearl and Penda in the early seventh century through to Ceolwulf II in 874. A great read, and on which will capture the imagination of anyone. No prior knowledge of the period or the people is required to enjoy this book to its fullest. There is also a good bibliography to encourage further reading.