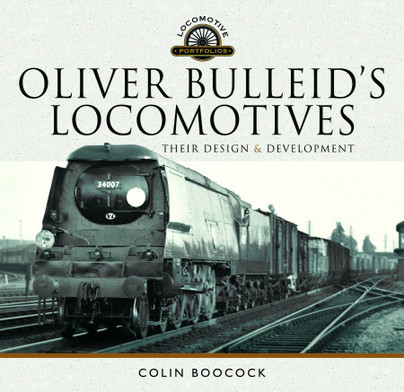 Click here for help on how to download our eBooks
Add to Basket
Add to Wishlist
You'll be £15.59 closer to your next £10.00 credit when you purchase Oliver Bulleid's Locomotives. What's this?
Need a currency converter? Check XE.com for live rates

"Southern Railway fans will find this book fascinating but many more will enjoy it."

"This book is a well written overview of the Bulleid era, by a competent engineer who can express himself in layman’s terms."

Written by a professional engineer who spent much of his early career at Eastleigh and Brighton, this book has considerable authority. He worked with J. G. Click and R. G. Jarvis, and had experience of Bulleid's work, which extended far beyond his steam locomotives, although the Pacifics are perhaps his best-known design. A significant part of the book therefore deals with diesel and electric locomotives.
Introductory chapters dealing with the Southern Railway as Bulleid found it, and the main characters are followed by those dealing with each design. These include those he inherited such as the Southern Q Class and CIE's earliest diesels. The troublesome Crossley diesels are described with due credit to the Metro-Vick electrical equipment and to the Inchicore engineers who rebuilt them to give long lives. As well as the leader, there is a chapter about the Turf-Burner.
Generally sympathetic towards the rebuilding of the Pacifics, the author was involved in its financial justification which showed a slight advantage. However, he criticises the additional balance weights on the coupled wheels, whose hammer-blow was noticeable in his office at Eastleigh. Several Bulleid features were included in the BR standard designs, but the author regrets the omission of electric lighting. Your reviewer, similarly, has long been surprised at the failure to use Boxpok-type wheels, which are lighter and support the tyres better.
The only questionable statement involves the D1 and E1 4-4-0s, credited with outside admission valves; the only diagram found, in Holcroft's Locomotive Adventure, casts doubt. Photographic reproduction, sometimes leaving something to be desired, is here beyond reproach, most of the illustrations being unfamiliar.
The book deserves a place on the bookshelf of every student of locomotives, especially Bulleid's By current standards, it is good value, and it was a pleasure to examine it.


The Railway Observer May 2021

A fresh and pretensioned work.

The Society of Model and Experimental Engineers Journal, June 2021

All of the chapters in Boocock’s work are liberally illustrated using a very fine selection of black and white and colour images which have reproduced well on the book’s gloss art paper. A number of line drawings and technical tables are included to support the text, and appendices relating to CIE’s diesel tendering process and the disappointing reliability of their fleet in 1958 are provided.

This is an outstanding work which brings together all the disparate threads linking the locos designed and built under Bulleid’s oversight in both Britain and Ireland, and is highly recommended.

Colin Boocock has produced a well-written and illustrated addition to the Bulleid book list.

COLIN BOOCOCK is a retired railway officer whose career, mainly in mechanical and electrical engineering, spanned forty-one years full-time work on British Railways and Railtrack and a further twelve or so years in part-time consultancy.

His career started at Eastleigh Works on the Southern Region, where he was trained in the late 1950s, later going on to work at railway establishments in all of BR’s original Regions including spells in Scotland and Wales, mainly managing the maintenance of locomotives and rolling stock at a senior level.

As a life-long railway enthusiast, he travelled widely on Britain’s railways but always had a keen interest in the developments on what he still regards as his ‘home railway’, the South Western.

This volume describes in some detail the railway he grew up on: the South Western, its main lines, key railway centres and the fascinating myriad of secondary routes and branch lines.