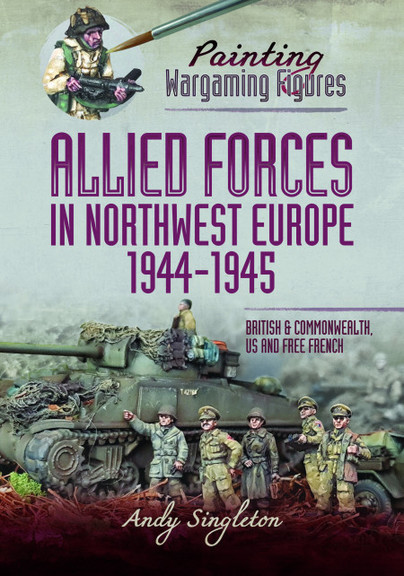 British and Commonwealth, US and Free French

Click here for help on how to download our eBooks
Add to Basket
Add to Wishlist
You'll be £7.98 closer to your next £10.00 credit when you purchase Painting Wargaming Figures – Allied Forces in Northwest Europe, 1944-45. What's this?
Need a currency converter? Check XE.com for live rates

This book is aimed at assisting those new or unfamiliar with historical figure modelling and wargaming by providing them with a range of simple tips and techniques to assist them in putting together good looking collections using methods that won’t take an age.

Covered in this book are an introduction to the majority of tools and materials commonly found in modelling, before moving on to cover clear, concise guides for painting British, American and Canadian forces, along with notes on the uniforms of the Free forces from occupied nations.

The guides cover all the common variations of uniform used during the period, including British and Canadian Battledress, Airborne forces uniforms, and the American M43 uniform, as well as when these uniforms were worn and introduced. Camouflage uniforms are also covered, and are broken down into how to apply the various patterns simply and with easy-to-repeat methods.

Illustrated with hundreds of photos, each stage of the guides has a combination of text description, photograph and list of both paint and brush size used to make the steps as easy to follow as possible.

I am very please with this book. The improvements over previous volumes have made it far more useful.

The figures used for the examples throughout the book are 20mm scale but of course the techniques can apply to others. Every step is clearly explained, from a dark base coat for shadows and then adding colour and highlights, including detail of the specific brush sizes and paint colours used for each stage. It is also worth pointing out that he does include notes saying where certain elements can be loft out if you have a lot of figures to do and want to save a little time. The standard of work illustrated throughout the book is excellent, and Andy does a really good job in explaining the techniques in a clear and easy to follow manner. Easily recommended for modellers and wargamers.