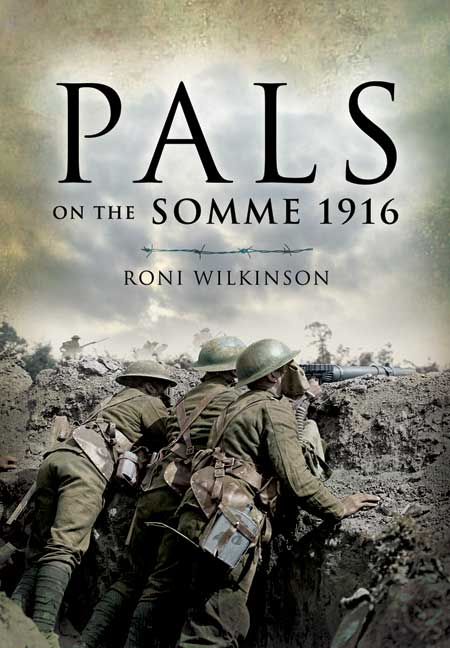 Click here for help on how to download our eBooks
Add to Basket
Add to Wishlist
You'll be £4.99 closer to your next £10.00 credit when you purchase Pals on the Somme 1916. What's this?
Need a currency converter? Check XE.com for live rates

Pals on the Somme covers the history of all the Pals Battalions who fought on the Somme during the First World War. The book looks at the events which led to the war and how the 'Pals' phenomenon was born. It considers the attitude and social conditions in Britain at the time. It covers the training and equipping of the Battalions, the preparations for the 'Big Push', 1st July 1916, and going over the top, and how each battalion fared, failed or succeeded. It looks at how they Battalions had to undergo a change after the 1st July, due to the heavy casualties, and the final victory in 1918, and how the battalions were eventually amalgamated. The final chapter examines how each area coped in the aftermath of losing their men in the three year slaughter. It covers the organisations and visits to the Battlefields as they are today.

This book by Roni Wilkinson is a very useful overview of all of these local stories and acts a one stop reference point, from which you can subsequently delve deeper via other histories into the stories of these Battalions.
The memory of the Pals, whether they are from Accrington, Barnsley, Salford or Hull, or so many other towns and cities, are still part of our national consciousness today This book tells the story of these battalions, and in turn brings to the readers attention their patriotism which resulted in such loss.

It is expected that any account of War will raise emotions. The writer has gone beyond the tragedy by seeing into the effects and the mark on social history. An excellent read.

I have always been fascinated by WW1 and the slaughter of the battlefields. This book shows the amazing bravery of the Tommy and the incredible battles they fought. A very interesting read that bears out the adage of ' Lions led by donkeys'.

This excellent volume, written by an author with over 50 years publishing experience and editorship of the famous Battleground Europe series, sets the scene and then covers everything the reader and researcher wants to learn - from the efforts to raise the battalions, through to equipping and training them and then the lead up to the actual battles in which they fought and the events thereafter. There are some very nice black and white photographs (including superb aerial views), which are in turn supported with maps and other photos featuring unit badges and formations signs. With the detailed Order of Battle also included, this makes a very useful volume that will be of interest to any Great War enthusiast, military or family historian and both badge and medal collectors alike.

By the end of January 1915, the four Liverpool pals battalions began training together as a brigade.

The image of the ill-fated Pals battalions getting slaughtered on the Somme has become part of our British psyche. This book covers the history of the Pals battalions who fought there, covering the events which led to the formation of the Pals and the raising, training and service of each of them. It also examines the devastating impact their losses had on local families when so few came home. Well written and well illustrated throughout.
A worthwhile tribute. 9/10