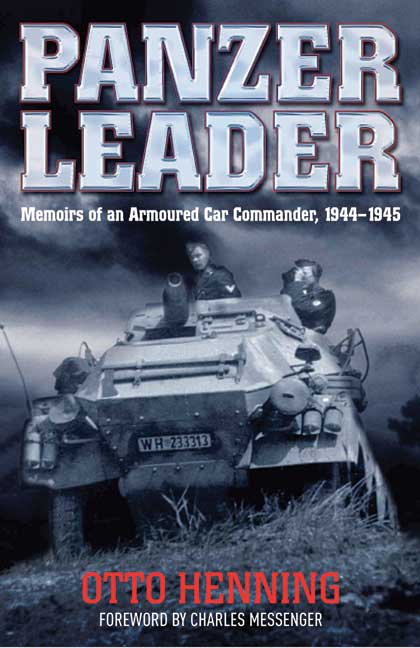 Add to Basket
You'll be £19.99 closer to your next £10.00 credit when you purchase Panzer Leader. What's this?
+£4 UK Delivery or free UK delivery if order is over £30
(click here for international delivery rates)

The armoured reconnaissance units were the spearheads of the Panzer divisions, moving stealthily ahead of the tanks to locate the enemy. Otto Henning's armoured car unit of the elite Panzer Lehr Division fought throughout the campaigns in the West in 1944 and 1945, arriving in Normandy a few weeks before D-Day and finally surrendering in the Ruhr pocket in mid-April 1945.

Henning describes the difficulties reconnaissance forces faced in the close terrain of the Normandy bocage and the threat posed by the Allies' complete control of the air. He saw the devastation wrought by Michael Wittmann's lone Tiger tank against the British 7th Armoured Division at Villers Bocage, and experienced the chaos and demoralisation of the Germans' retreat across France. After the Battle of the Bulge and the final fighting in western Germany, Henning surrendered and endured terrible conditions as a prisoner-of-war in France until he escaped in 1947.

This is a fascinating and often harrowing account of the final campaigns in Western Europe, and exposes the little-known scandal of the treatment of German prisoners

OTTO HENNING joined the panzers in 1941. From March 1942 until April 1943 he served with a motorized reconnaissance unit of Rommel's Afrika Korps. From 1944 Henning fought in Western Europe with the elite Panzer-Lehr-Division, eventually commanding an armoured reconnaissance unit. Captured by US forces in April 1945 he finally escaped from France in 1947 to rejoin his family in the Russian zone of Germany.