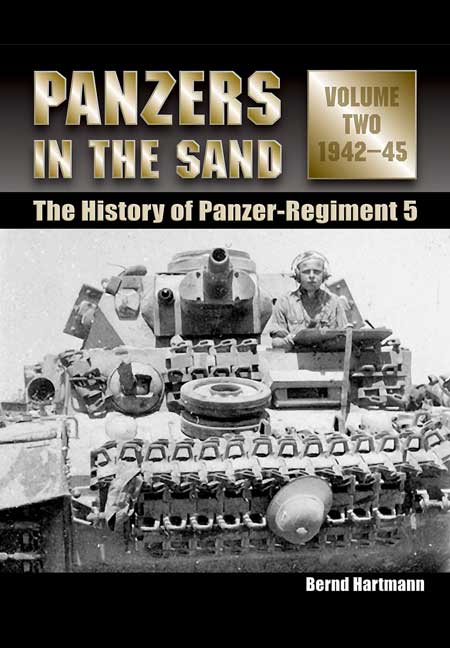 The History of the Panzer-Regiment 5

Few weapons of war have inspired as much awe and terror as German Panzers, which shocked the world with their raw power as the Third Reich's blitzkrieg rolled across Europe in the early years of World War II. Equipped with these steel giants, Panzer-Regiment 5 embodied the bold spirit of Germany's armoured force and fought with skill and courage in the African and European theatres.

Panzer-Regiment 5 joined Erwin Rommel in North Africa and helped the Desert Fox win an impressive string of victories during 1941, but the regiment's-and Rommel's-most dazzling successes would come in 1942. After ending 1941 in defensive positions, the Germans began the new year with an offensive that quickly captured Benghazi and then drove east toward the fortress of Tobruk. Destroying the Gazala Line, Rommel and his Panzers took Tobruk in June and continued their push into Egypt before being halted by the British at El Alamein in October.

By 1943, the African campaign had shifted west to Tunisia, where Panzer-Regiment 5 battled British and American tanks and participated in Rommel's last offensive at Medenine. Crippled by supply problems and Allied air superiority, the Germans surrendered in May 1943.

The remnants of Panzer-Regiment 5 were eventually reconstituted as Panzer-Abteilung 5, an assault gun unit, and sent to the Eastern Front to contend with Soviet T-34's. Increasingly outnumbered, the panzer men nevertheless fought bravely as German fortunes faded in 1944 and 1945.

Featuring scores of photographs and vivid firsthand accounts from members of the unit, the second of Panzers in the Sand picks up where the first left off and continues the combat history of Panzer-Regiment 5 and Panzer-Abteilung 5, from the sand and sun of North Africa to the bitter end near Berlin.


The text is supported by an excellent (and sizable) selection of photographs, mainly from the period in North Africa, although there are some from the fighting on the Eastern Front. There is also a useful photographic appendix on the panzer troop's uniforms, and an interesting selection of awards and certificates, often linked to a picture of the recipient. There is also a good selection of maps, organisation charts and diagrams showing the various types of armoured vehicles used by the regiment and its successors (each accompanied by statistics and notes on the individual vehicle).
The text itself has been translated well and is clear and readable. The narrative is supported by plenty of supporting information, presented in a way that doesn't disrupt the flow (medal winners, timelines, lists of commanders, tables of organisation etc. The text us supported by plenty of first hand accounts of the action, which give a great feel for the sense of elation during the early successes and the depression as the fighting turned permanently against Germany.

This is the second volume of the history of the Panzer Regiment 5 and tells the story of its
involvement in battle between 1942 and 1945. Extremely well written and researched, this is a perfect book for military historians or anyone interested in world war two battles. The regiment fought alongside Rommel throughout the North African campaign and earned many honours. The photographic images brilliantly evoke the period and life for soldiers serving in the panzer regiment. There is a wealth of detail, covering both fighting techniques and individual stories. It is mainly about their involvement in Africa, but also covers the Eastern Front in 1944 and 1945.

The second volume of a book originally published as a German edition but now an English translation has been done, following the history of Panzer-Regiment 5. This second volume covers the period of 1942 through to the end of the war, starting from the end of the British Operation Crusader, when the DAK had been pushed back but not surrounded and beaten. While the British forces were now a long way from supplies coming from Alexandria, the position of the opposing forces had changed once more. The advance from Crusader had to be halted, and Rommel worked out a recovery. They moved back eastwards, and this time captured Tobruk, which is covered in the book. Plenty of photos, maps, organisation tables plus copies of original documents such as orders from Rommel, and all accompanied by a text that tells the story largely using the memories of the veterans that the author had spoken to as he has made a great job of piecing together the available facts, records and individual memories to sort out as accurate a story as he could.

The story takes us through the advance back across North Africa, to what ended up in the Battle of El Alemein. From there the retreat continued all the way back to Tunis, despite some occasional local victories, such as over the US Forces at Kasserine. Even some rare re-supply with the later long 5cm gun armed Pz III and the long 75mm armed Pz IV were not enough to make a difference. All the various factors are included, with the logistic of operating along the North African coast, the supply problems, the repair and recovery organisation and more. Eventually, the remaining operational Panzers, only about 30, were destroyed by their crews on an airfield west of Tunis in May 1943. Battlefield attrition and the final surrender in North Africa led to the end of this stage in the life of Panzer Regiment 5.

Some troops survived however, those on leave, sent home for medical attention and others in training. They formed the nucleus of a new Panzer Regiment 5 and were re-equipped with Stug III assault guns. In action from November 1943, particularly in the region of Smolensk on the Eastern front, the revived unit distinguished itself once more. In mid-1944 however, they were encircled along with the the bulk of Army Group Centre by the Red Army, and once again the bulk of the regiment went into the bag.

That was still not the end though, as another new Panzer Regiment 5 was formed and equipped, this time with Panthers. Following the battle of the Bulge in the Ardennes, the regiment was fighting the US forces in that region, before being sent once more to the Eastern Front, where they took part in Operation Nordwind, and with the fighting defence of Berlin. In 1945 the end came at last, when the survivors were told to scuttle their tanks and head for the Western Allies to surrender, which many of them succeeded in doing. All of these sections are heavily illustrated with period photos.

The final third of the book is filled with support information in some 8 Appendices, again full of photos. These focus primarily on the people of the regiment, listing the Commanders over time, the Knights Cross Recipients, Cross in Gold recipients and suchlike. They cover Logistics, and Uniform and finally Document, Decorations and Awards, which includes copies of many orginal documents, medals and details of who received them.

All in all, this couples well with Vol 1 to make a great set. Not only the history, but memories recorded for later generations rather than being lost and recognition of the individuals involved, the people. Filled with a host of marvellous period photos, while the historian will find lots to enjoy, so will the modeller as the pictures show so much details of uniforms, vehicles and equipment, while many also give some amazing inspriation for dioramas to have a go at.

The latest volume of Panzers in the Sand details the vehicles, tactics and campaigns in which Panzer Regiment 5 were involved in between 1942 and 1945. The hardback 320-page book contains numerous archive images of the men and machines of Panzer Regiment 5, with maps, diagrams and documents together with illustrations supplementing the heavily researched text that offers an insight into the unit during their time in the desert. While many of the photos are taken in the desert, there are also some images depicting tanks during their pre-deployment training.

The second volume in this excellent and beautifully produced series.

Crammed full of great photographs of a German Panzer regiment at war and in training.

It is a well researched second volume featuring the German Armies most fearsome weapons, the Panzers.

This volume covers the history of Panzer Regiment 5 throughout the final years of WW2.

First published in German in 2002, these two volumes are a comprehensive history of Panzer-Regiment 5 by a veteran of the formation. The unit was among the first of the new Wehrmacht to be equipped with tanks back in 1935 and it took part in the Polish and French campaigns. The unit is most famous, however, for its deployment, in March 1941, to North Africa where it formed part of first 5 leichte Division and then 21 Panzer Division. Following its defeat in Tunisia in 1943, the regiment was reformed (equipped with Sturmgeschutz lll) and fought on the Eastern Front, before (this time equipped with Panthers) fighting as part of the new Panzer brigades in the West. The regiment ended the war as part of 25 Panzer Division north of Berlin.

This really is a cracking read - a mixture of good old fashioned military history, personal anecdotes and technical information. Both the men of the regiment and the machines they fought in are given equal attention and both volumes are illustrated with many period photos, many of which are unseen. The bulk of the two volumes is devoted to the fighting in North Africa and this is essential reading for any students of the Desert Campaign. The photographs of Panzer lll's, heavily modified by the regiment in the field, provide perfect inspiration for anyone tacking any of Dragon's new kits, while there are enough new images here to whet the appetite of most Panzer fans. Overall i can't recommend these volumes highly enough. 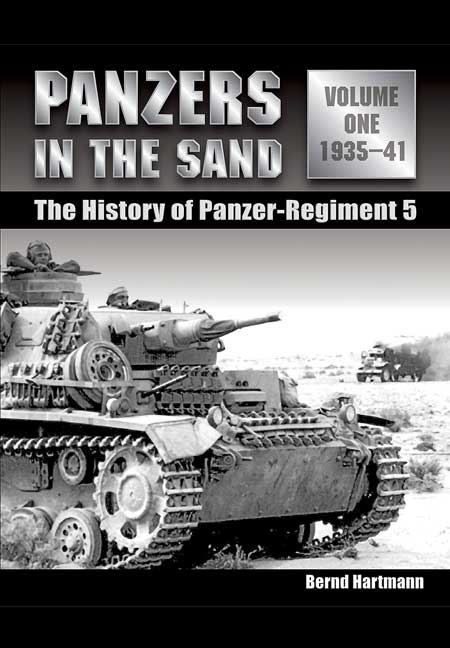 In September 1939, the tanks of Panzer-Regiment 5 swept into Poland, a devastating part of the German blitzkrieg that opened World War II with a terrifying display of military force. The following spring, the regiment rumbled across France, again showing the destructive power of the panzer. But the unit’s greatest fame would come in the North African desert, where Panzer-Regiment 5 joined Erwin Rommel’s vaunted Afrika Korps as it battled the British back and forth beneath the scorching sun of Libya and Egypt.


Click here to buy both titles for £39.98
Customers who bought this title also bought...