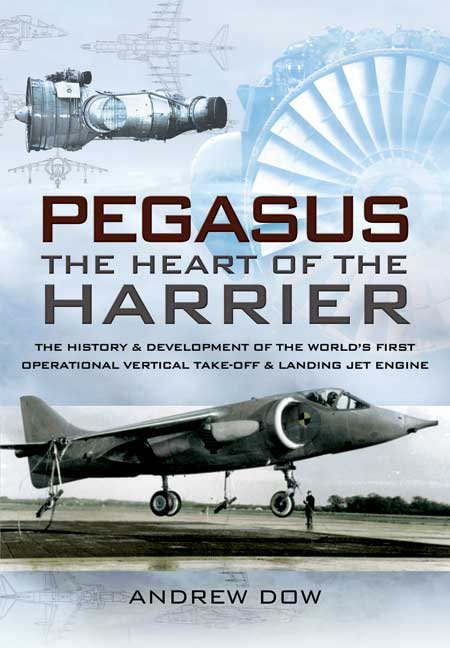 Pegasus - The Heart of the Harrier (Kindle)

Click here for help on how to download our eBooks
Add to Basket
Add to Wishlist
You'll be £4.99 closer to your next £10.00 credit when you purchase Pegasus - The Heart of the Harrier. What's this?
Need a currency converter? Check XE.com for live rates

The conception of the Pegasus engine in 1957 upset all the conventions of aircraft design. It was previously usual for aircraft designers to seek a suitable engine, but this was an engine that sought an aircraft. The aircraft that resulted was the famous Harrier that is still in front-line service with air forces around the world including the RAF and US Marine Corps. This book takes an in-depth look at the engine's original design concept, initial production and flight testing. It then goes on to explain how the developments and improvements have been made over the ensuing years and includes experiences of operational combat flying, both from land and sea.

The book is written in a non technical style that makes comfortable reading for all enthusiasts and historians and is copiously illustrated with many previously unseen photographs and diagrams.

The Rolls Royce Pegasus was a jet engine revolution in a single product. It was even more important than the WWII Merlin engine. This book is an outstanding document, worthy of an outstanding subject. It is a tour de force with many fine photographs, sketches, drawings and tables and well worth every
penny of the cover price, although with Pen & Sword there will also be some great special offers that will make this great book affordable to a much wider readership. The author has done a really great job in producing a very readable account that will be appreciated by engineers, enthusiasts, historians and general readers.

Brilliantly told, this is a story about ideas and people, and it is fascinating reading. Highly recommended.

This book can be simply described as "All that you wanted to know about the RR Pegasus".
A truly "must have" book for all aviation enthusiasts interested in modern aviation. Strongly recommended.

This book can be simply described as “All that you wanted to know about the RR Pegasus”.
It is a book that required a huge and wide research work indeed on the Hawker/BAE, RR and Bristol archives and generally speaking it is also a wonderful journey through the long and troubled history of the V/STOL flight.
Author Andrew Dow (known as George to all his RR’s colleagues) worked for Bristol and then for Rolls Royce for near 30 years and this stands out clearly from the rich and detailed story of the people involved in the remarkable feat of design, develop and produce one of the most revolutionary engines in the aviation history.
His vision ”from the inside” produced an authoritative and surely competent work but also a very readable one.
All the intricacies connected with the development of this remarkable engine (the one that made possible the only real operational and successful V/STOL combat aircraft in the form of the HARRIER and its derivatives AV-8B and SEA HARRIER) are told by Mr. Dow in a fact packed and dynamic history.
From the text it clearly appears that the secret for the HARRIER and PEGASUS success was an extremely competent and integrated team of well determined people, both in the Bristoll/Rolls Royce team and the Hawker/BAE one.
The text illustrates the fascinating genesis of the engine from the cumbersome and odd “Gyroptere” project of Marcel Wibault that contained the seeds of the PEGASUS to the masterpiece of ingenuity designed by “the perfect team” represented by the two talented designers John Fozard (Hawker Siddeley) and Stanley George Hooker (Bristol and then Rolls Royce).
The Author then details the fascinating story of the “American HARRIER”, since the P.1127 days to the definitive HARRIER both in the AV-8A and second generation AV-8B forms.
The B&W illustrations and drawings clearly illustrate all the details of this revolutionary engine, well integrating a truly “must have” book for all aviation enthusiast interested in the modern aviation. Strongly recommended.

If ever an engine merited such special attention, it is the game-changing Rolls-Royce Bristol Pegasusand its time has come with this splendid weighty book by Andrew Dow. For many years the author had direct experience of the Pegasus within the commercial department of Bristol Siddeley Engines. This day job and his spare time interests in technology and archival research make him an ideal chronicler for the Pegasus. The book has an excellent index, useful appendices and a treasure trove of illustrations.

Being one of the most innovative gas turbine aircraft engines ever developed, it is gratifying to see a book dedicated to the Rolls-Royce Pegasus, arguably the world's first successful VTOL aircraft engine.